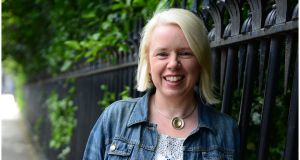 One Family chief executive Karen Kiernan: “It is unacceptable to continue to sentence a generation of children to a lifetime of poverty and poor life chances.” Photograph: Bryan O’Brien/The Irish Times

Some 32 per cent of households headed by single parents were at risk of poverty last year, compared with 31.7 per cent in 2013. Single-parent households suffered the most deprivation, with 58 per cent at risk of poverty experiencing two or more types of “enforced deprivation”, such as not being able to afford to have friends or family over for a meal or drink, or to replace worn out furniture.

The unemployed (22.6 per cent) and single-parent households (22 per cent) suffered the most consistent poverty.

Consistent poverty is an income below the 60 per cent median income threshold, along with experiencing deprivation of at least two very basic needs, such as a warm overcoat, the ability to eat meat or an equivalent at least every second day or being able to keep the home warm.

“We would expect to have seen the beginnings of a reduction in child poverty rates in 2014,” he said. “However, one in nine children still lives in consistent poverty and more than a third of children experience deprivation, while the number of children at risk of poverty has not improved since 2010. This puts paid to the rhetoric that ‘a rising tide will lift all boats’.”

Karen Kiernan, chief executive of One Family, said the high deprivation rates among one-parent families directly resulted from Government choices and policies. “It is unacceptable to continue to sentence a generation of children to a lifetime of poverty and poor life chances. People parenting alone tell us . . . that they constantly live on the knife edge of poverty. Government continues to enforce ill-formed activation measures without the provision of effective supports such the long-promised, affordable quality childcare.”

Tánaiste and Minister for Social Protection Joan Burton however welcomed a reduction in the national levels of deprivation rate, from 30.5 per cent to 29 per cent.

HSE audit finds problem with departing staff paying for Cycle-to-Work scheme 15:22
Health worker double-paid thousands for same shifts by HSE and agency 15:22
UCD to introduce class on how bystanders can intervene in harassment 15:02
Judge has ‘great sympathy’ for man set to lose his Co Louth home 14:49
Dublin man may have been stabbed to death by woman in parking space row 14:42