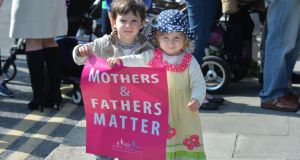 The Mothers and Fathers Mattercampaign group have contacted gardaí about the issue of their ‘No’ vote posters being taken down. Photograph: Alan Betson/The Irish Times

A Dublin hotel is promising its customers a 50 per cent discount if they take down posters for the forthcoming marriage equality referendum advocating a No vote, according to its Facebook page.

The Charleville Lodge Hotel on the North Circular Road in Phibsborough is offering the discount because of the predominance of No side posters in the area.

The Facebook post reads: “Nearly every poster near Charleville Lodge Hotel Dublin (Dublin 7) is Vote No. I am not happy about this. So, to clear the area of these nasty posters, I am running another special offer.

“P.S. Feel free to creatively deface the poster. Draw a devil on it or something.”

Emails and calls to the owner Paul Stenson were not returned.

It is not the first time that controversial postings have appeared on the Charleville Lodge Hotel Facebook page.

When asked in an RTÉ interview earlier this year if he was the Michael O’Leary of the hotel world, a reference to his outspokenness, Mr Stenson responded: “Well he’s one of my great idols. Being compared to him? I don’t think there can be anything wrong with that.”

The Facebook page which was posted on Sunday morning received almost 2,000 likes by Sunday evening.

In response to the posting, one person wrote: “Whereas I won’t be voting as I live in north wales (sic), freedom of speech works for both sides. If someone who frequents your establishment was a no voter, they could take offence and decide to spend elsewhere.

“Personally, I couldn’t care less, but this sort of behaviour is of a slightly fascist nature, do what we want or go to hell. As a business, you’d probably be better off staying neutral,” to which the hotel replied: “When (well) then maybe no voters (i.e. people who don’t believe that everybody should be treated equally) shouldn’t stay here??? No skin off my nose, like. I’ve only 30 rooms.”

The No side have already complained that their posters have been taken down.

Mothers and Fathers Matter have contacted the gardaí about the matter.

The organisation, which is advocating a No vote, said: “Each morning of this week, Twitter and other social media sites have been full of Yes campaigners bragging and posting photographs of themselves taking down posters belonging to the Mothers and Fathers Matter campaign.

“It is with great regret that we have taken the decision to forward all of these materials, tweets, Facebook posts, and so on to An Garda Síochána. ”

A Garda spokesman said posters belonged to whichever side put them up and taking down them could constitute a case for criminal damage if a complaint is made.

The Charleville Lodge Hotel certainly has form in courting publicity.

Earlier this year it offered discounts to customers if they turned their Irish Water registration forms into paper airplanes.

And last year it was at centre of controversy when it told angry Garth Brooks fans to “get a life” after it wrongly claimed his series of Croke Park concerts would “definitely” go ahead.