Same-sex marriage will be possible from November 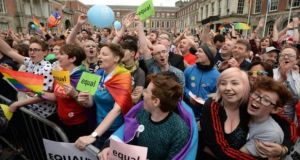 The final step in the marriage referendum saga will take place on November 16th, when Minister for Justice and Equality Frances Fitzgerald signs the commencement order giving effect to the new Marriage Act 2015, which allows same-sex couples to marry.

The Marriage Act 2015 was signed into law last Thursday by the Presidential Commission, as President Michael D Higgins was completing an official visit to the US.

The commission is made up of the Chief Justice Susan Denham, the Ceann Comhairle of the Dáil Seán Barrett and Cathaoirleach of the Seanad Paddy Burke.

A new sentence has been added to Article 41 of the Constitution, reading: “Marriage may be contracted in accordance with law by two persons without distinction as to their sex.”

From November 16th, same-sex couples who married abroad will have their marriages recognised automatically by the State.

There will be no further civil partnerships from that date.

However, there will be no automatic “upgrade” from civil partnership to marriage. Any change in status will entail a ceremony before a registrar.

The law also makes it clear that priests and other religious solemnisers will not be obliged to solemnise the marriage of a same-sex couple.

Brian Sheehan, co-director of the Yes Equality Campaign, expressed his gratitude to the Government, Ms Fitzgerald, and the public service for the speed with which the result of last May’s same-sex marriage referendum was being enacted in law.

Mr Sheehan said that the result of the Irish referendum had given “an extraordinary lift to LGBT activists all across Europe”.

He said people from countries where gay people continue to experience oppression, such as Russia, Georgia, and other former Soviet republics, were “anxious to express their thanks [to the Irish people] and to say the vote has given them courage and energy,” he said.