Restrictions in Protection of Life Bill demeaning to women

Who is it that should decide whether her body should be used for the propagation of an unborn child, other than the mother? 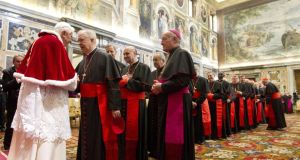 Our culture has absorbed “the poisonous misogyny of the Roman Catholic Church”. Photograph: Getty Images

Tonight the (almost) all-male parliament will vote to imprison a woman, for up to 14 years, who refuses to give her body to the sustenance of another human being, irrespective of almost all circumstances.

It is irrespective of whether the pregnancy would do serious and irreversible harm to her health for the rest of her life.

It is irrespective of the circumstances whereby she became pregnant, for example, if she had been gang-raped and was distraught at the prospect of bringing to full term the child of one of her rapists.

And those 140 or so TDs who vote for this Bill tonight will vote for a provision (section 18) that makes it unmistakably clear that nothing in the Bill shall prevent a woman having an abortion abroad. Even up the road in Newry, Armagh, or Derry, where abortions are legal, if there is a long-term risk to a woman’s physical health, as distinct from merely her life.

Hypocritical
So what the TDs are voting for is not the protection of unborn life, as the Protection of Life During Pregnancy Bill 2013 hypocritically proclaims, but for restricting access to abortion in this jurisdiction only and in ways that can be shamefully demeaning to women and to those suffering from mental illness.

If it ever transpires that a woman seeks an abortion here because she is so overwrought as to be suicidal, she will be subject to the debasing process of seeking the approval of an obstetrician and two psychiatrists. And if one of these eminences declines to recommend a termination of pregnancy, she may appeal to a review panel of 10 medical practitioners, who may take three days even to assemble, and they will decide. It’s not the woman who will decide, but the medicos, almost certainly a majority of whom will be vastly overpaid, upper middle -class males, a category not renowned for its feminist ardour. At the heart of this is disbelief; that women who indicate suicidal intention because of their pregnancy are likely to be faking it.

There will be 30 or so TDs for whom this debasement of women is not enough. They want to disbar from the prospect of abortion here any woman who is suicidal because of pregnancy, irrespective of whether they are faking it or not.

This intrusion on the autonomy of women is founded on the virulent misogyny that pervades our culture. The culture that demeaned women by disbarring them from employment for centuries; that excluded them from the institutions and positions of power; that made them the property of their husbands; that still often portrays them as the mere sex toys of men; that has so infiltrated the consciousness of millions of women that even they believe their role is the mere “helper” of men (see Genesis chapter 2, verse 18). The culture that has absorbed the poisonous misogyny of the Catholic Church. Aside from an acknowledgement of a women’s right to life, there has been hardly a mention of any other entitlement on the part of the mother by any of the anti-abortion advocates, including the Catholic bishops (whose effrontery in engaging in any debate to do with morals is itself astonishing). It is as though they regard women as mere incubators.

Of course abortion is a moral issue. It involves the destruction of human life and that quintessentially is a moral issue, if we understand morality as having to do with how we, human beings, treat each other. And of course there are circumstances in which abortion is or would be immoral.

Who knows better?
But above all, who is it that should decide whether her body should be used for the propagation of an unborn child, other than the mother? Who else knows better than she what the emotional, psychological, physical and circumstantial consequences to her of going full term with a pregnancy?

The old adage that, if men could have a baby, abortion would be a sacrament, may be a bit stretched. But, as sure as hell there would not be that phalanx of men trooping through the lobbies tonight to send men to jail for up to 14 years if they refused to allow their bodies to be used for the sustenance of another irrespective of the consequences to them. Even the women TDs might balk at that one.