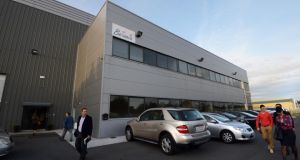 The exterior of the Romanian Pentecostal Church near Mulhuddart. Photograph: Cyril Byrne 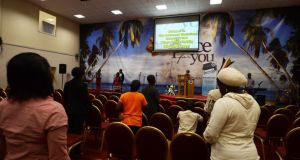 Inside the Redeemed Christian Church of God, near Mulhuddart. Photograph: Cyril Byrne 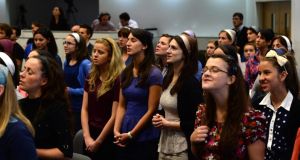 Members of the congregation of the Romanian Pentecostal Church near Mulhuddart. Photograph: Cyril Byrne 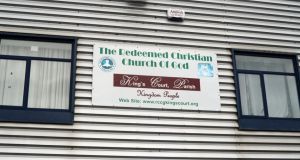 Exterior of the Redeemed Christian Church of God, near Mulhuddart. Photograph: Cyril Byrne

Warning notices are likely to be issued to religious groups in the Fingal County Council area who are using warehouses on industrial estates as places of worship, according to the Mayor of Fingal, Kieran Dennison.

He said a survey of industrial units in Dublin 15 found that 20 warehouses in the Blanchardstown area were being used for worship. Most of them are in areas zoned for “general employment” or “high technology”, in which places of worship are not permitted by the Fingal development plan.

Mr Dennison said there were health and safety concerns relating to the use of some of the warehouses, particularly ones located close to chemical plants.

Religious groups using warehouses for worship in Ireland include Muslims, Pentecostals and Orthodox Christians. These are the fastest-growing religious communities in Ireland.

Fingal has one of the highest population growth rates in the country and recorded the largest increase of non-Irish nationals in the 2011 census.

Almost 7,000 people in Fingal are Muslim but there are no purpose-built mosques in the area. Fingal is also home to 22 per cent of Apostolic and Pentecostal members in Ireland.

Affordable
Warehouses are affordable places to rent for migrant groups who often struggle to secure suitable premises for worship. They may start out in residential houses, but parking restrictions, planning regulations and complaints because of traffic congestion often result in relocation to industrial units.

Shaykh Muhammad Umar Al-Qadri of the Al Mustafa Islamic Centre, which is located in Coolmine industrial estate in Blanchardstown, says it is their fourth premises since 2004. The first building was a residential house in an estate in Clonee. “The neighbours initially had no problem with us. But then they saw people wearing different types of clothes, and every Friday they saw men with long black beards coming to pray. I would say there was a sense of fear. This is when the local authorities were informed. We were given one month to leave. It was a very difficult time.”

Their current premises is the third industrial unit they have rented and the largest so far. It can accommodate 375 adults. They have spent €40,000 on it and have taken a five-year lease.

“If we didn’t have industrial units as places of worship, the Muslim community of Dublin 15 would have nowhere else to go for their social, cultural and religious needs,” Shaykh Umar says. “The Islamic Centre is also a platform which connects the Muslim migrant community with the local service providers”.

Mr Dennison said the council recognised “the need of migrant communities to have places to congregate and to worship. However, as a planning authority we are obliged to ensure compliance with the planning regulations.”