Tens of thousands attend Rally for Life in Dublin 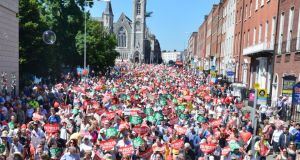 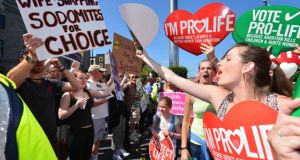 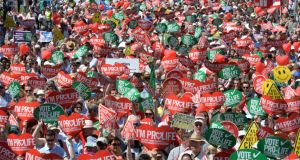 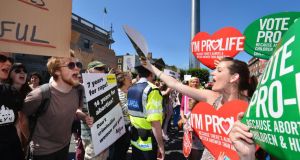 Rally for Life anti-abortion Demonstration passed through a counter pro-choice demonstration at the Spire.  Photograph: Alan Betson / The Irish Times 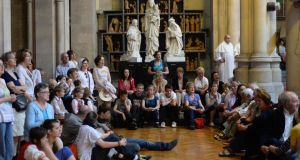 Archbishops Diarmuid and Eamon Martin celebrated Mass in St. Savior’s Church, Dominick St before the before the Rally for Life. Photograph: Alan Betson / The Irish Times 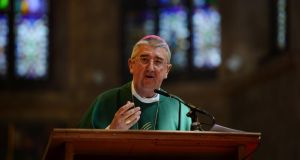 Archbishop Diarmuid and Eamon Martin celebrating Mass in St. Savior’s Church, Dominick St before the before the Rally for Life. Photograph: Alan Betson /The Irish Times 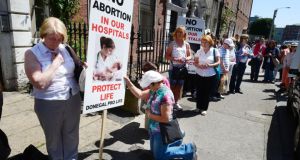 Mass goers outside as Archbishops Diarmuid and Eamon Martin celebrate Mass in St. Savior’s Church, Dominick St before the before the Rally for Life.  Photograph: Alan Betson / The Irish Times 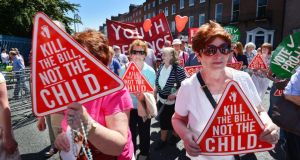 The Christian message “respects every human life, from the moment of conception to the moment of natural death and at every moment in-between. It respects the life of the unborn; it cherishes and wishes to protect the lives of mothers and mothers to be,” the Cathlolic Archbishop of Dublin Diarmuid Martin has said.

He was speaking at a Mass to celebrate the gift of human life at St Saviour’s Church on Dublin’s Dominick St on Saturday. The Mass concelebrant was Coadjutor Archbishop of Armagh Éamon Martin.

In his homily Archbishop Diarmuid Martin continued “all our activities in the defence of human life must be seen and understood and be recognised not as narrow politics or ideology or spin-doctoring, but as authentic loving concern.”

He said “our response to anyone who challenges us with narrow politics or ideology or spin-doctoring must never be a response on those same terms, but be one which witnesses to the nobility of a truth witnessed in love.”

Faith, he said, “can never and never should be forced or imposed on others. But that does not mean that the values which spring from faith and the values which inspire believing citizens have no legitimacy in a pluralistic society and should be simply pushed aside into the dustbins of irrelevance.”

It would be “unhistorical to the point of dishonesty to say that the Judeo-Christian tradition and the witness and commitment of believers have not shaped the fundamental good principles which inspire our Irish society,” he said.

“No matter what legislation is in place in any nation and no matter how such legislation will change, the Church will continue to teach about the dignity of each human life and how the direct and wilful destruction of human life is never acceptable,” he said.

Archbishop Martin was speaking in advance of the Rally for Life in Dublin on Saturday afternoon. A crowd estimated by gardaí at 35,000 took part in the a march which began at Parnell Square and proceeded to Leinster House through the city centre.

The Life Institute, which organised the Rally, estimated numbers at 60,000. A major Garda operation was in place as the march passed by pro-choice supporters who had lined some of the route along O’Connell Street.

Speaking to the Rally outside the Dáil, Libertas founder Declan Ganley said: “Let those senators and TDs use the power granted to them under Article 27 of the Constitution to let the people speak on this bill. Give us a referendum and let us vote.”

Niamh Uí Bhriain of the Life Institute said “if you refuse, Taoiseach, to let the people vote, then the people will be heard. 100,000 people have already signed the pro-life pledge, 100,000 will seek to build a new political alternative, 100,000 will remember Taoiseach, that if you ram through this law, you are the abortion Taoiseach and Fine Gael is the abortion party, and they will seek an alternative which protects both mother and baby.”

Deputy chair of the Pro-Life Campaign Cora Sherlock said “ I hope TDs take note of the crowd here today”. Dr Eoghan de Faoite of Youth Defence said “there was a huge momentum building to let the people vote on the Bill using Article 27 of the Constitution”. Bernadette Smyth of Precious Life noted that “the All Party Pro-Life Group from Stormont is represented here today, since this is a matter for All-Ireland, as we stand together against abortion,” she said.

Approximately 30 people from the Ancient Order of Hibernians in the US also took part in the Rally.