Expense and inconvenience involved would have one certain outcome: the abandonment of Catholic church weddings by even more couples in favour of civil weddings 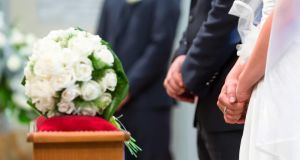 The threat to end the role of Catholic priests in solemnising marriage if the same-sex referendum got through should be seen for what it was: a crude strategy to frighten people into voting No.

At a time when up to a third of marriages in the Republic are civil ceremonies, and rising, it would be foolishness on the part of the church to insist couples undergo separate church and civil ceremonies. The expense and inconvenience involved would have one certain outcome: the abandonment of Catholic church weddings by even more couples in favour of civil weddings.

It is a safe bet that the bishops will not alter the current situation.

In fairness, during the referendum campaign no bishop initiated such a threat or raised the issue. That was done by media following an intervention by Martin Long, director of the Catholic Communications Office in Maynooth.

On April 12th, he said: “At the moment on behalf of the State, the priest acts as the solemniser of the marriage between a woman and a man. Obviously if the definition of marriage changes then this role will change. If the referendum is passed the church’s view and the State’s view of marriage will be radically different. It’s reasonable that the bishops may decide to separate the two.”

Later a spokeswoman for Archbishop of Dublin Diarmuid Martin said his view on on the matter was: you “cross bridges when they come”.

In early May, Archbishop of Armagh and Primate of All-Ireland Eamon Martin replied: “We haven’t made up our mind . . . clearly it is an issue for us.” He repeated this at Knock after the referendum and said the bishops would discuss it at their meeting in June, which takes place this week.

Their colleagues in England and Wales warned they, too, might stop conducting the civil part of wedding ceremonies when same-sex marriage legislation was introduced at Westminster in 2012.

In 2013 they prepared a document outlining fears that a change in the law would create “an emerging gulf between religious and secular conceptions of marriage. The effect of the Bill, if it is passed, will be to make a more complete separation of church and state in the area of marriage almost inevitable”.

Legislation to allow same-sex marriage in England and Wales was passed in July 2013 and came into force in March 2014. More than a year later, the Catholic Church is still performing marriages as before.

When “the threat” first emanated from Maynooth last April, Fr Brendan Hoban of the Association of Catholic Priests described it as the church “acting in a huff”. It is difficult not to agree with him.