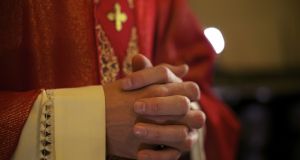 “The implications for all ordained ministers are frightening.” File photograph: Getty Images

A parish priest falsely accused of child abuse has asked why Catholic Church authorities give any credence to anonymous allegations such as were presented against him.

Fr Tim Hazelwood, parish priest at Killeagh in east Cork, explained how “in May of this year I was successful in securing an apology and an admission that what was claimed about me was false, ie – that I was an abuser.

“This followed a High Court action taken on my behalf against my accuser. The action was settled before it went to trial. My accuser never came forward but remained anonymous.” It left Fr Hazelwood “with many questions and very few answers”.

On three occasions over recent years he had asked people at the church’s child protection watchdog, its National Board for Safeguarding Children, and “on each occasion I failed to secure a tangible answer. All I got was vagueness.”

Then “a few weeks back during a meeting I held with the acting child protection officer and his deputy in my own diocese in Cloyne. I was informed that the policy is to inform the relevant authorities following an anonymous allegation against a priest. There it was at last in no uncertain terms. No ambiguity this time.”

It prompted him to ask “what about natural justice?” He also asked “what of about Canon Law” noting that “Canon 220 states: ‘No one is permitted to harm illegitimately the good reputation which a person possesses or to injure the rights of the person to protect his or her own privacy’.”

His experience was “that my good name and reputation was disregarded. When I attempted to prove my innocence I received no help but was met with bullying behaviour and my attempts to help myself was blocked in every way by the diocese.

“The implications for all ordained ministers are frightening. We are at the mercy of those with personal agendas or issues with individual priests.”

Fr Hazelwood’s comments appear on the Association of Catholic Priests’ website under the heading Church Collusion in Calumny.