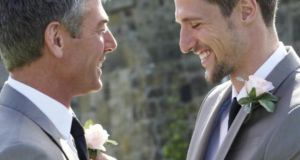 The Presbyterian Church in Ireland said it “upholds the historic – and Christian – view of marriage as exclusively between one man and one woman. We affirm that it is needed for the common good of society”. Photograph: Getty Images

The Presbyterian Church in Ireland has called for a no vote in the marriage equality referendum on May 22nd next.

In a statement it has said: “The Presbyterian Church in Ireland upholds the historic – and Christian – view of marriage as exclusively between one man and one woman. We affirm that it is needed for the common good of society.

“In recognising the rights of all people within a democracy, we must include the rights of children, and the natural responsibilities of a father and a mother in their nurture. We believe the change proposed in the referendum denies these rights.

“A redefinition of marriage would establish new norms within our society, the implications of which have not been fully explored. We acknowledge that this is an intensely emotive subject and trust that all will engage in the debate with gentleness and respect as we approach the referendum.”

It means that of the four main Churches in Ireland two are now calling for a no vote, the Catholic Church and the Presbyterian Church in Ireland. *