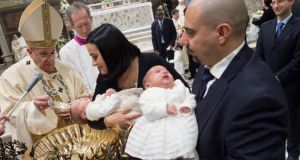 Pope Francis baptised 33 infants in the Sistine Chapel yesterday and told the mothers to feel free to breastfeed them if they cried or were hungry.

“You mothers give your children milk and even now, if they cry because they are hungry, breastfeed them, don’t worry,” he said, departing from his prepared text.

The written text of his homily had the phrase “give them milk,” but he changed it to use the Italian term “allattateli”, which means “breastfeed them,” and added that they should not hesitate.

As the 20 girls and 13 boys in the room famous for Michelangelo’s frescoes cried, Francis asked his listeners to remember poor mothers around the world, “too many, unfortunately, who cant give food to their children”.

Even before he read the homily, at least one mother was seen breastfeeding, perhaps recalling that the pope had used similar words to make mothers feel at ease before.

Baptism is the sacrament at which infants or converts are initiated into the Christian faith. Francis poured water on the foreheads of the infants as part of the ritual.

The Sistine Chapel, which Michelangelo painted in the 16th century, is the room where cardinals elect popes in secret conclaves. Francis was elected the first non-European pope in 1,300 there on March 13th, 2013.