Avoiding pregnancy may be ‘lesser evil’ in certain circumstances 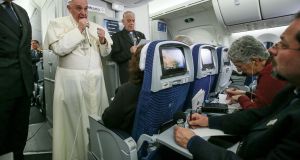 Pope Francis has indicated that women exposed to the Zika virus may be permitted to use contraception to avoid pregnancy, in a departure from Catholic teaching.

However, he reiterated the church’s staunch opposition to abortion, saying it was a crime and “absolute evil”.

His comments came as women in South America frantically try to terminate pregnancies for fear of giving birth to babies with microcephaly, which gives them unusually small heads.

Speaking to reporters on the papal plane as he returned to Rome after a visit to Mexico, the pope obliquely suggested that artificial contraception could be used in extreme situations to avoid pregnancy.

Unlike abortion, “avoiding pregnancy is not an absolute evil” and in certain circumstances it may be “the lesser evil”.

He referred to the exceptional dispensation issued by one of his predecessors, Pope Paul VI, who permitted Catholic nuns in Africa to take birth control pills in the face of the risk of being raped. He was thought to be referring to the conflict in what was the Belgian Congo in the 1960s and 1970s.

But, the pope said, abortion could never be allowed, even for women who may be carrying foetuses with serious brain defects caused by the Zika virus. Abortion was “a crime”, he said.

“It is killing one person to save another. It is what the mafia does . . . It is an absolute evil.”

Earlier the Vatican ruled out easing its ban on abortion in the face of the Zika virus.

“Not only is increased access to abortion and abortifacients [abortion-inducing drugs] an illegitimate response to this crisis, but since it terminates the life of a child it is fundamentally not preventative,” the Vatican said.

The Holy See representative to the UN announced the Vatican’s response during the launch of a $65 million (€58.5m) campaign by the World Health Organisation to tackle the spread of the Zika crisis.

An estimated 4,000 babies have been born with microcephaly, which has been linked to their mothers becoming infected with the Zika virus by mosquito bites.

“It must be emphasised that a diagnosis of microcephaly in a child should not warrant a death sentence,” said Archbishop Bernardito Auza, the Holy See’s permanent observer to the UN. Such a response would be “the confirmation of a failure of the international community to stop the spread of the disease”, he added.

Abortion is banned or highly restricted in many countries affected by the Zika crisis. Earlier this month, the Catholic church in Brazil – one of the worst affected countries – said it strongly opposed a move to permit abortions for pregnant women exposed to the Zika virus. “There is no justification to defend abortion,” it said.

Governments in several countries have advised women to delay getting pregnant for up to two years, while international bodies have urged a relaxation of abortion bans in the face of the crisis.

A Canadian group which supplies advice and abortion pills to women has reported a big increase in online requests from women in South America.

Women on Web said it had received more than 1,000 emails begging for abortion-inducing medication such as mifepristone and misoprostol from women in countries where the drugs are banned.

“Women who are pregnant and suspect that they have had Zika just don’t want to take the risks of having a microcephalic baby. Our worry is that these women will turn to unsafe abortion methods, while we can help them with a safe, medical abortion,” Rebecca Gomperts, the group’s founder, told the Washington Post.

One email said: “I contacted Zika four days ago. I just found out I’m about six weeks pregnant. Today. Today, I found out I’m pregnant. I have a son I love dearly. I love children. But I don’t believe it is a wise decision to keep a baby who will suffer. I need an abortion. I don’t know who to turn to. Please help me ASAP.”