Pope says contraception ban does not mean breed ‘like rabbits’

Pope Francis speaks about birth control during a news conference onboard the papal plane. Video: Reuters 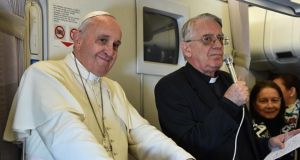 Pope Francis (left) flanked by Padre Federico Lombardi speak to journalist onboard a plane during his trip back to Rome, on Monday from the Philippines. Photograph: Getty

Pope Francis last night sprang a surprise when he called on Catholics not to “breed like rabbits” but instead practice “responsible parenting”.

Speaking on the plane on the way back to Rome from Manila in the Philippines after a week-long visit, the pope said: “I believe that three children per family, from what the experts say, is the key number for sustaining the population.

“The key word here is responsible parenthood and each person works out how to exercise this with the help of their pastor… Sorry, some people think that in order to be good Catholics we have to breed like rabbits, right?

“Responsible parenthood: this is why there are marriage support groups in the Church with people who are experts on such issues; and there are pastors and I know that there are many acceptable solutions that have helped with this.”

He cited the case of a woman he met who was pregnant with her eighth child after seven Caesarean sections.

“That is an irresponsibility,” he said. Although the woman might argue that she trusts in God, “God gives you methods to be responsible,” he said.

He said there are many “licit” ways of regulating births that are approved by the church, an apparent reference to the Natural Family Planning method of monitoring a woman’s cycle to avoid intercourse when she is ovulating.

During the Vatican’s recent meeting on the family, African bishops denounced how aid groups and lending institutions often condition their assistance on a country’s compliance with their ideals: allowing health care workers to distribute condoms, or withdrawing assistance if legislation discriminating against gays is passed.

“When imposed conditions come from imperial colonisers, they search to make people lose their own identity and make a sameness,” he said.

“This is ideological colonisation.”

In a wide-ranging press conference, the pope also spoke about poverty, corruption in the Church, freedom of expression, China, the role of women in the Church among other things.

He also indicated that he will travel to the Central African Republic and Uganda towards the end of the year, as well as to the USA in September and to Ecuador, Bolivia and Paraguay.

The pope also resorted to colourful language when talking about corruption not just in society but also in the Church when he recalled an incident that happened to him as an auxiliary bishop in Flores in 1994.

Two ministry officials visited him to offer approx. $400,000 for his work with the poor, said the pope.

He added: “I listened carefully because when you’re offered such a large sum it’s enough to make even a saint think twice. Then they said to me: ‘To make this donation, we will pay a deposit and then you give us half of the money’.

At that moment I thought: do I insult them and kick them where the sun don’t shine or do I act dumb?

“I acted dumb. I said to them: ‘you know… those of us who work in the vicariates don’t have access to the account, you have to pay a deposit to the archbishopric with a receipt.’ They left.”

Pope Francis also said that corruption is now “a global problem” adding that the greatest victims of corruption are the poor.

Speaking about his visit to the Philippines, the Pope became very moved when recalling the warmth of his reception, a reception highlighted by an open mass attended by approximately 7 million people in pouring rain last Sunday, saying:

“I was moved by their gestures (of Filipinos), they were not formal gestures that followed protocol, they were genuine gestures that came from the heart...Faith, love, family, the future, in that gesture fathers made of lifting their children up so the Pope could bless them.

In making a week long pastoral visit not just to the Philippines but also to Sri Lanka, the Pope had once again visited to draw the world’s attention to Asia and to the problems of world’s poor. He returned to this issue in his press conference, calling on the clergy to reject “worldliness”:

“The poor are the victims of a culture of waste. Today people are cast aside, the caste system comes to mind…

“In my diocese, the diocese of Buenos Aires there was a new area called Portomadero and not far from there were the villas miserias. In the first part there were 36 luxury restaurants, in the other part there was hunger. Both were right next to each other. We apparently tend to get used to this…

“This is us and that is where the outcasts are. This is what poverty is and the Church needs to increasingly lead the way in rejecting all kinds of worldliness.

“For us, the consecrated, bishops, priests, nuns and lay people, worldliness is the gravest sin. It is an ugly thing to see a consecrated person, a person of the Church, a nun adopt a worldly attitude. This is not the way of Jesus, of Jesus’ Church. That is an NGO calling itself a Church”.