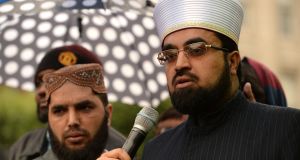 A Muslim leader who has invited gay people to take part in a community meal at his mosque in west Dublin has drawn contrasting criticism from some Muslims and LGBT groups abroad.

Shaykh Dr Umar Al-Qadri, chairman of the Irish Muslim Peace & Integration Council, had described the invitation as an attempt by “the Irish Muslim community to reach out to our neighbours as an example of true Islamic ideals”.

When later defending the decision from young Muslim critics, however, he appeared to describe homosexuals as “those who commit Fisq [sin]”, sparking fresh criticism from groups representing gay Muslims.

The invitation to members of the Irish LGBT community coincides with the council’s second annual community Iftar in the Al-Mustafa Islamic Centre at Blanchardstown west Dublin on Saturday evening. Iftar is the evening meal when Muslims end their daily Ramadan fast.

Shaykh Al-Qadri, who is chairman of the council and imam at the Al-Mustafa Islamic Centre mosque, said members of the Muslim Youth Council of Ireland had questioned his invitation to LGBT people to take part in the Iftar.

“How can you do this? Are you condoning homosexuality?” they had asked him, he said.

“This is about respecting people. It is not condoning, to eat together,” he said, but agreed it was “a very revolutionary step”.

On Facebook this week, in response to such criticisms, he posted that “Last year in Ramadan we invited Tomi Reichental, a Jewish Holocaust survivor, to our community Iftar. This year we will invite members of the LGBT community also and reach out to them with the spirit of Ramadan.

Shaykh Al-Qadri referred in his Facebook post “to the beliefs of Jewish people and Christians [insinuated], and LGBTQIA people’s ways of loving, respectively, as ‘Kufr’, ‘Shirk’ and ‘Fisq’”, it said.

It claimed “all of these are slurs against these respective communities. Those of us who have been to mosques can attest to this, as these words are usually shouted with spittle and are filled with venomous hatred.”

Rejecting these interpretations of his Facebook post, since deleted, Shaykh Al-Qadri described them as “not very helpful” and suggested their “offensiveness” might be related to the experiences of LGBT people elsewhere.

He had “a positive response” from LGBT people in Ireland to his invitation and was looking forward to the community Iftar.