Most Catholics back married priests and contraception 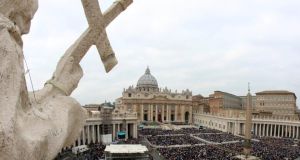 A view of St Peter’s Square in the Vatican. Photograph: Alessandro Bianchi/Reuters.

A survey of over 12,000 Catholics across five continents finds most disagree with some of the fundamental tenets of church teaching, primarily those on sexual morality.

The survey, which was carried out by the US-based Spanish language TV Univision, found 78 per cent of Catholics favoured the use of condoms, 50 per cent were in favour of priests marrying while 58 per cent disagreed with the ban on divorcees and remarried couples receiving communion.

The survey also found 57 per cent of Catholics agreed with abortion in cases where the life of the mother or child was at risk.

The survey was carried out in Brazil, Argentina, Colombia, Mexico, Spain, France, Italy, Poland, Uganda, Congo, the Philippines and the USA.

Inevitably, there were major differences from continent to continent.

For example, 64 per cent of Europeans were in favour of the ordination of women, as were 59 per cent of those polled in the US, but in Africa 80 per cent were opposed.

Only 10 per cent of Europeans believed abortion should never be allowed as opposed to the 72 per cent of Catholics in the Philippines who remain totally opposed.

Ironically, many of the findings of this opinion poll appeared to be confirmed by a series of Vatican documents released in recent days.

With the first of two Synods on the Family due to be held next October, the Vatican’s Synod of Bishops last autumn sent out a questionnaire to Bishops’ Conferences worldwide.

The Synod called on the Bishops to distribute the 39 point questionnaire “as widely as possible… so that input from local sources” might be collected before next October’s Synod.

Religious agency SIR reported the first of the replies from the Swiss, German and Luxembourg conferences all contained similar expressions of concern.

There are what the German Bishops call “very big differences between the faithful and the official doctrine of the church” on a range of issues including contraception, homosexuality and the communion ban on divorcees.

The Swiss Bishops found that while faith still remains important for Swiss Catholics, there is no longer an “unconditional acceptance” of much of church teaching on the family, marriage and sexuality.

The Catholic Bishops of Luxembourg also added their concerns.

“The results are all the more alarming in that they evidence the growing gulf between the magisterial teaching of the church and the way this doctrine is received and perceived by the faithful,” they said.