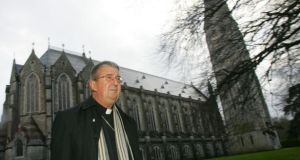 Archbishop of Dublin Dr Diarmuid Martin has said he intends to send seminarians from his archdiocese to the Pontifical Irish College in Rome instead of the national seminary at Maynooth because of concerns about ‘strange goings-on’ in St Patrick’s. Photograph: Brenda Fitzsimon/The Irish Times

There will be a review of social media policies and procedures for handling whistleblowers at St Patrick’s seminary in Maynooth following allegations of trainee priests using dating apps, the college’s board of trustees has announced.

During a meeting in Maynooth on Tuesday, the board also asked the Irish Bishops’ Conference which is based in St Patrick’s College to commission an independent audit and report into the governance of Irish seminaries.

Those who oversee the management of St Patrick’s came in for criticism earlier this month when media reports surfaced of trainee priests using the Tinder dating app as well as its gay equivalent, Grindr.

Following those reports, a number of ex-seminarians came forward with accounts of alleged bullying and sexual harassment they had suffered during their time at the Maynooth college, and in a statement released on Wednesday the trustees say they “share the concerns about the unhealthy atmosphere” there.

Archbishop of Dublin Dr Diarmuid Martin has said he intends to send seminarians from his archdiocese to the Pontifical Irish College in Rome instead of the national seminary at Maynooth because of concerns about “strange goings-on” in St Patrick’s.

In subsequent interviews he described a “poisonous” atmosphere at the Maynooth seminary and urged its board of trustees, which comprises Ireland’s four archbishops and 13 other senior bishops, to meet as soon as possible to address the issues which had arisen.

As part of the suite of measures, the Irish Bishops’ Conference has been asked to conduct a triennial review of St Patrick’s College and the Irish Pontifical College in Rome next spring.

The St Patrick’s board of trustees has also requested that the conference “progress urgently a uniform national policy for admissions to Irish seminaries” and to establish a subcommittee to examine “the pastoral needs of priestly training in Ireland”.

A statement issued by the Irish Bishops’ Conference read: “There is no place in a seminary community for any sort of behaviour or attitude which contradicts the teaching and example of Jesus Christ.

“The trustees share the concerns about the unhealthy atmosphere created by anonymous accusations together with some social media comments which can be speculative or even malicious. Persons with specific concerns are encouraged to report them appropriately as soon as possible.”

The announcement of a series of reviews and audits coincides with 14 new seminarians beginning their training at St Patrick’s this week, which will swell the number of resident seminarians to 41 for the coming academic year.

Archbishop of Dublin Diarmuid Martin acknowledged the need for institutional reform in a homily Wednesday at the final Mass in the Mater Dei Institute chapel as it becomes part of DCU’s new multi-denominational teacher training college.

He said most of the institutions set up to train priests and faith-based teachers “are slowly vanishing from or are being transformed” in Dublin. Catholicshould not be alarmed but see rather new opportunities, citing “possible new forms of the preparation of future priests”.