‘If there is a gay culture, it must be among a very small number of men’ 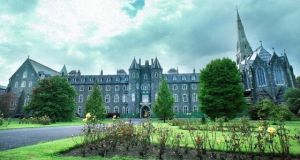 The seminarian indicated he had been “blown away” by some of the things said. He had nothing but praise for the formation staff there. Photograph: The Irish Times

A seminarian currently attending St Patrick’s College, Maynooth, has dismissed recent reports of “strange goings on”, saying they are in complete contrast to his own experiences.

The man contacted The Irish Times to say he has been “blown away” by some of the things said. He had nothing but praise for the formation staff there, “who have done everything to foster my vocation”.

He had “never felt any culture of fear, never felt any at all. And as for this talk of keeping your head down, I’ve been totally open”.

When it came to the human formation part of training, he said “guys are asked about their sexuality, which is completely understandable”.

Commenting on some of the things said about the seminary, he remarked that “there is nothing more vengeful, malicious even, than a seminarian who feels wronged.”

‘A lot of cliques’

He might have surmised that some colleagues were gay, but that was as far as it went.

“I didn’t even know what Grindr was before this,” he said, referring to the gay dating site used by some seminarians at Maynooth, it has been claimed.

“If there is a gay culture, it must be among a very small number of men because the rest of us had no idea about it.It wasn’t an open secret, which is the way the press is covering it. If the seminarians didn’t know about it, then there’s no way the staff could have.”

Neither had he ever heard about confidentiality documents, or of people being asked to comply with them. “But if it was a big deal, there would be talk about it,” he said.

In his view, “there is no secrecy agreement. If it was anything controversial, it would be discussed among the students, but I’ve never heard it mentioned. I’ve never felt that there is a culture of secrecy in the seminary.”

Relations between seminarians and other students at Maynooth are also much freer and easier than portrayed recently.

He cited a Strictly Come Dancing event at the seminary recently. “There’s no question of secrecy,” he said. “It doesn’t come into it.”

He believes Msgr Connolly has been handling matters since the crisis broke “with great respect for all. The Monsignor could have said that to the media, but instead took the high road, which is what I and the majority of the other seminarians would expect.”