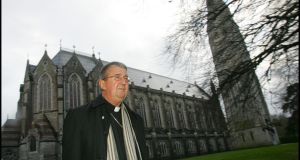 Catholic Archbishop of Dublin Diarmuid Martin: Speaking at a Mass in the Pro-Cathedral he said at 11 years of age he was “stunned by the 1956 uprising in Hungary. It seemed to be a moment which would change history”. Photograph: Brenda Fitzsimons

Catholic Archbishop of Dublin Diarmuid Martin has appealed for the protection of small nations and vulnerable peoples be a top priority for Irish foreign policy.

Speaking on Tuesday evening at a Mass in St Mary’s Pro-Cathedral to mark the anniversary of Hungary’s uprising in 1956, he said 60 years on we must “learn lessons for Ireland and for Hungary and for our Europe today.

“I would love to see a passion for the protection of small nations and people be a top priority for Irish foreign policy, even if at times it meant taking an independent stance from partners.”

The lesson of the Hungarian people in 1956 “indicates who, in the annals of history, is remembered as the truly noble. I think also of small nations and people in our world today; I think of victims of religious intolerance; I think of peoples we expose to climatic disasters so that we can feel comfortable,” Archbishop Martin said.

“Policy and politics and public opinion change not just through swings in voting majorities. Change of hearts is what brings real change. It is men and women of integrity and idealism who change society. It is men and women who reflect the mercy and compassion of Jesus who show us the type of caring world we all long for.”

“Then suddenly all changed. People who were courageously asking just for minimum recognition of their rights, as individuals and as a people, were faced with the violent oppression of their aspirations.”

Leaders whose names symbolised hope to an 11 year-old Dubliner “were replaced by faceless bureaucrats put into place to impose a different Hungary. Appeals for help from the outside world fell on deaf ears. Cardinal Mindszenty took refuge in the American Embassy giving some hope that his exile in his homeland would be shortlived. But that was not to be so.”

He recalled being proud “that Ireland began to offer hospitality to refugees from Hungary. For the first time in my life I began to understand what solidarity among nations meant.

“The dominant impression I was left with, however, even at that young age, was a sadness about the fate of small nations in a world of harsh realpolitik, when appeals for help were met by cold rationality.”

Coronavirus: 306 new cases and one further death reported by Nphet 18:02
Pat Finucane murder: British government will not establish public inquiry 18:07
Seventeen life-sentence prisoners released last year 17:41
Man who stole more than €95,000 in social welfare under false names jailed 17:30
Three jailed over refusal to pledge to stay away from farm to remain in prison 17:20