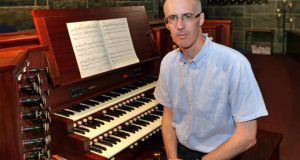 Few directors of music at European cathedrals can say they have held the post for almost half the lifetime of the august building in which they work. But that is the case with Ray O’Donnell of Galway Cathedral, who has been director of music since January 1994.

The youngest of Europe’s great stone cathedrals, it was dedicated 50 years ago today, on August 15th, 1965, by Cardinal Richard Cushing, Archbishop of Boston.

His successor Cardinal Seán O’Malley marked the event at a special Mass in the Cathedral of Our Lady Assumed into Heaven and St Nicholas, to give its full title, last night.

It may be a baby among Europe’s cathedrals, but its 44m green dome dominates the Galway city skyline. That was one reason local wags dubbed it “Taj Miceál” after the formidable Bishop of Galway, Miceál Browne, who built it.

He was bishop from 1937 to 1976 and set about his great project in 1940 when he wrote to Galway County Council seeking to buy the site of the disused city jail.

“I submit to you there could be no more noble or more fitting use than to erect on it a cathedral in thanksgiving to God, who sustained our people in their days of trial. A cathedral replacing a jail is the most perfect symbol of the triumph of a people who were proscribed for being Irish and Catholic.”

Bishop Browne got the site for £10. That, it must be said, was not all down to him pressing the right buttons.

According to a Galway Observer report, the then secretary of the council CI Ua Flainn, in the true spirit of his kind, told councillors “members should take into account that the cost of the cathedral will largely have to be borne by the people of the county. Therefore, if a free site were given, it would reduce the ultimate cost of the cathedral.”

In 1941 Galway county council chairman Eamon Corbett handed over the key of the jail to Bishop Browne. It was demolished and in 1949 John J Robinson of Dublin was appointed architect for the cathedral.

The people of Galway diocese contributed to a weekly collection and donations were received from home and abroad; £100,000 came from the Boston archdiocese alone and a further £30,000 from Cardinal Cushing. The total cost, including furnishing, was almost £1 million.

It took almost eight years to complete with its mix of architectural styles: Romanesque nave arches, Spanish choir area, Renaissance towers, Gothic windows. The ceiling is of American wood from the Pacific Northwest.

It falls to him and his committee to organise the popular series of recitals that have taken place at the cathedral in July and August each year for the past 22 years. A highlight of the 2015 series was a community performance of Benjamin Britten’s cantata Saint Nicolas in July.

The Britten cantata was a major part of a year-long programme of events marking the cathedral’s 50th anniversary. The Priests – three priests from Northern Ireland – perform at the cathedral tomorrow at 8pm

Like most people who come to live in the city, O’Donnell has fallen in love with Galway, though he was recently reminded he must be there for at least another 30 years before losing the epithet of “blow-in”.

The most marked change he has noticed at the cathedral the past 21 years has been declining congregations, particularly noticeable in a building with a 2,000-seat capacity.

However, that is not an issue in early February each year when the novena takes place there.

In his address at the cathedral 50 years ago today Cardinal Cushing said it was “worthy to take its place among the great cathedrals of the world. Architecturally faithful to the traditions of Galway, it is a symphony of line and colour, of aesthetic inspiration and of functional effectiveness harmoniously blended; it will command the attention of all generations for its massive beauty, its bold design and the visions of those whose generosity and goodness has made it possible.”

1 Coronavirus: Donnelly ‘cautiously optimistic’ about Dublin
2 Man with electric scooter who died in Meath was due to get married in the coming weeks
3 ‘Entirely wrong’ to remove pandemic payment from students, says Sinn Féin leader
4 Hospitality industry suffers another blow as New Year’s Eve festival is cancelled
5 Covid test in use at Rome, Frankfurt, Dusseldorf airports being piloted in Roscommon
Real news has value SUBSCRIBE