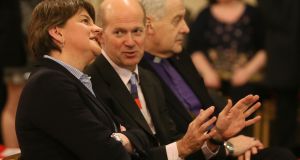 Northern Ireland First Minister Arlene Foster does not believe the reference in the 1916 Proclamation about cherishing all the children of the nation equally included the people she and her party represents. “Sometimes Sinn Féin quote that [phrase] to us, yes, I am aware of it,” she said when asked whether she was familiar with the phrase.

“No, they were talking about a different nation because under articles two and three of what was to become the Constitution of Ireland 1937 laid claim to Northern Ireland and that was dealt with in the 1998 Good Friday Agreement and now the people of Northern Ireland, by consent, remain within the United Kingdom.

“And that certainly is where I show my allegiance to and where it is today,” she said.

Ms Foster was in Dublin on her first visit to Dublin as First Minister where she attended talks on 1916 at Christ Church Cathedral. Chaired by John Bowman it included talks on ‘A state of chassis – Ordinary People in Extraordinary Circumstances in Dublin in 1916’ by Dr Dr Fearghal McGarry of Queen’s University Belfast and Dr Jason McElligott of Marsh’s Library, in Dublin

First Minister Foster said that as an amateur historian herself she “thoroughly enjoyed tonight’s contribution. I thought it was fascinating.”

Regarding the role 1916 had played in the Northern Ireland Troubles as well as the ongoing activities of dissident republicans she said: “this is the worrying thing. Certainly for those of us that grew up in Northern Ireland during the 1970s and ’80s the use of 1916 to justify what was happening in Northern Ireland was very clear to us and I think that is why for a lot of Northern Ireland Unionists they see it in a very particular way.”

Asked whether she found hypocritical political parties in the Republic who expected her and the DUP to share government in Northern Ireland with Sinn Féin while themselve refusing to do so she said “certainly mandatory coalition is not an easy form of govenment and I would never suggest it is.

“Do we want to move away from mandatory coalition? Absolutely. In the future we want to have a devolved settlement where we could choose our partners in government. Down here of course it is a different situation. We don’t have that choice.”

Speaking to the media the Taoiseach said it was very fitting the First Minister should be at the event and welcomed her wholeheartedly. He said President Hollande would be attending the Somme commemoration in Ireland later this year and that an invitation had also been extended to British Prime Minister David Cameron to come “at an appropriate time during the Somme period of commemorations, as well”.

He said he had recently spoke to Prince Charles who had himself expressed a wish “to do something appropriate at some stage during the year, not obviously for any member of the royal family to be present during the course of Easter week centenary celebrations.

“There may be an occasion when it would be appropriate for himself and Lady Camilla to attend sometime during the year.”