Catholic pilgrims bring a little piece of Ireland to Krakow 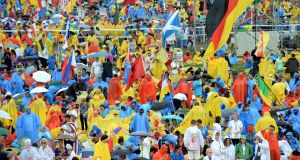 A little corner of Ireland has sprung up on the periphery of Krakow, Poland, for this week only.

This is the Sw Kazimierza church and environs, which has become the focal point for many of the 1,600 young Irish pilgrims who are attending this week’s Catholic World Youth Day celebrations in the handsome Hapsburg city.

When co-ordinator Gerard Gallagher of the Dublin Archdiocese Office for Evangelisation and Ecumenism was preparing for the event, many people told him that Irish youths would not be interested in it.

You will maybe get about 50 or so to go with you, they told him.

At first glance, the World Youth Day event is about as attractive as being asked to eat a bag of snots.

Accommodation is makeshift and involves at least one night camped out in your sleeping bag in Blonia park.

With half the city closed to traffic, the pilgrims have to walk everywhere, sometimes in the rain, with many walking an average of 15km per day.

On top of that, there is little or no drinking at the event and the food is on the modest side.

Despite this, more than one million people will attend Sunday’s final open-air Mass with Pope Francis.

There is a reason for this. It is also, strangely, a fun event.

It is a Glastonbury with God, or the Catholic Woodstock, with Francis in the unlikely role of Jimi Hendrix, as he warns that “the world is at war”.

Pope Francis is undoubtedly a star attraction, but what is arguably even more attractive is the event’s multicultural, multi-ethnic mix, which brings together young pilgrims from at least 180 different countries.

When they are not at catechisis or at a papal event, they stomp up and down the town, singing songs, high-fiving other pilgrims and comparing notes, spiritual or otherwise.

Tomas McNamara from Celbridge, Co Kildare, Kathryn McKiernan from Rathcoole, Co Dublin, and Fearghal Johnston from Rathfarnham, Co Dublin, are three of the young Irish pilgrims who love the whole “vibe” in Krakow.

All three come from an Irish generation where Catholics can seem like an irrelevant, if not endangered, species.

The trio feel that Krakow has been a very positive Christian experience.

Tomas said that in Krakow, “you have a nice time at a religious event, which doesn’t always happen”.

Kathryn said she hopes the experience will help her “inspire younger people in my own parish”, whilst Fearghal thinks this week will help him be “more confident about my faith”.

In the meantime, everyone is grateful that their Polish hosts have provided them with sturdy ponchos, given the regular rain.

The World Youth Day is certainly not for softies.