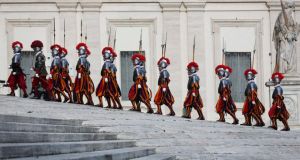 Swiss Guards at the Vatican. An Extraordinary Synod of Bishops begins in Rome on October 5th.

Traditionalists in Rome’s College of Cardinals have decided to get their revenge in first, so to speak, prior to the Extraordinary Synod of Bishops which begins in Rome on October 5th.

The five men concerned include heavy-hitters such as German cardinal Gerhard Müller, prefect of the Congregation for the Doctrine of the Faith (CDF), and Irish American cardinal Raymond Burke, prefect of the Supreme Court of the Apostolic Signature. Both will be taking part in the Extraordinary Synod.

Another heavyweight, Irish Australian cardinal George Pell, prefect of the Vatican Secretariat for the Economy, will take part in the Extraordinary Synod too. He has written a foreword to another book to be published on October 1st, The Hope of the Family. It includes an extended interview with Cardinal Müller.

All make clear that when it comes to church teaching on marriage, including the ban on remarried divorced Catholics from receiving communion, they are not for turning – whatever the noises off from Santa Marta, where Pope Francis resides.

Both Cardinal Pell, whose mother’s maiden name was Burke, and Cardinal Burke, are regular visitors to Ireland. Burke, who was dropped from the Vatican’s Congregation of Bishops by Pope Francis last November, is a regular visitor to the annual Fota International Liturgy Conference in Cork. He opened it last July.

Last year, during debate on the Protection of Life during Pregnancy Bill, Burke said Taoiseach Enda Kenny’s description of himself as a taoiseach who happens to be a Catholic, but not a Catholic taoiseach, did not make any sense. “One cannot, as a Catholic politician, excuse oneself from the question of abortion by claiming one should not bring one’s Catholicism into the political realm,” he said.

Cardinal Müller played a significant role where the ongoing silencing of Irish priests is concerned. Negotiations between one of those priests, Fr Tony Flannery, and then-prefect of the CDF Cardinal William Lavada were approaching solution when Cardinal Müller took over the role in July 2012. He adopted a much harder stance.

Irish Catholics will be represented at next month’s Extraordinary Synod by Archbishop of Dublin Diarmuid Martin.