Atheist Ireland invites Muslim schools in Ireland to be inclusive 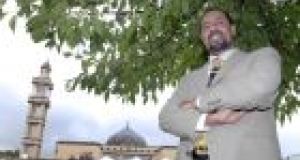 A file photograph of Dr Ali Selim at the Centre for Islamic Studies in Clonskeagh, Dublin. His book, Islam and Education in Ireland, is published on Thursday. Photograph: Dave Meehan

The Atheist Ireland group has welcomed calls by Dr Ali Selim of the Islamic Cultural Centre in Dublin for a “revolution of inclusivity” in Irish schools and “an upheaval in Irish educational perspectives”.

It also invited “ the two publicly funded national schools under the patronage of the Islamic Foundation of Ireland to lead the way by including the children of atheists and secularists in their schools.”

Dr Selim , who is also a lecturer at Trinity College Dublin and the Mater Dei Institute, made the calls in a new book to be published next Thursday.

Islam and Education in Ireland will be launched by Dr Andrew McGrady, director of the Mater Dei Institute, in Trinity College’s Long Hub Room at 6pm on Thursday.

In a statement Atheist Ireland pointed out that the Muslim schools to which it referrred were part of the national education system and, given Dr Selim’s calls for upheaval and inclusivity, it said “ we are anxious to understand how these schools will accommodate the children of atheists and secularists and lead the way in removing religious discrimination in the education system.”

It pointed out that, according to its website, the first Muslim national school in Ireland, set up in 1990, “ is not exactly welcoming of those of us who do not share the Islamic ethos and it gives us no indication of how our children will access a neutral studying environment in accordance with human rights law. Hopefully this is all about to change as part of the revolution of inclusivity.”

“The uniform required for the students is in align with Islamic requirements (for example the code of dress).The class libraries include Islamic books in their stock, while Islamic posters and pictures add to the Islamic atmosphere.”

“Eight days are taken at the end of Ramadan and continues through Eid-ul-Fitr. Five days holiday are taken for Eid al-Adha...and that “hijab for girls (obligatory in 5th/6th class) must be white.”

Atheist Ireland “would prefer if our children did not get time off for all the religious festivals.... as they will miss a significant part of their education.” However, it also looked forward “to all schools recognising Darwin Day and International Blasphemy Rights Day.”

The group looked forward also to working with the Islamic Foundation of Ireland “to promote a revolution of inclusivity, so that all children regardless of what their parents believe will have access to a neutral studying environment in accordance with human rights law and access to their local school without religious discrimination.”

However, and failing that, it invited Dr Selim to join with Atheist Ireland “to campaign for a secular education system where all children are treated equally in all schools regardless of their parents religion and where religion is passed on through families, mosques and churches.”