Social housing strategy to be published within weeks 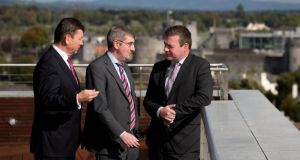 A new model of “public housing” will be announced in the Government’s social housing strategy, to be published within weeks, Minister for the Environment Alan Kelly has said.

Mr Kelly said yesterday the State’s reliance on the private sector to provide social housing was “wrong” and “simply unacceptable”.

Speaking at an Irish Council for Social Housing (ICSH) conference in Limerick, Mr Kelly said the five-year housing strategy would include a new model of public housing that would cater not just for traditional social housing tenants, but people who priced out of the private sector.

“Through this strategy, the Government intends developing a new vision of public housing provision that provides for households who cannot afford to house themselves and for people who struggle to afford housing in the private market.”

“The privatisation of social housing should never have happened. It was a disgrace,” he said. “It was wrong, and it was more than wrong, it was simply unacceptable and we are going to change that.”

Thousands of homes would be provided over the next five years through the strategy he said. He was in discussions with Minister for Finance Michael Noonan and Minister for Public Expenditure Brendan Howlin on funding the strategy but, he said, it would require a mixture of direct capital expenditure and “off-balance-sheet funding”.

In addition, he wanted local authorities to do more to bring vacant housing back into use. “It is totally unacceptable that units are left boarded-up for the length of time they are . . . Local authorities have a huge role to play ensuring that there are no voids – no units that are left vacant for long periods of time.”

ICSH executive director Donal McManus said housing associations could provide 5,000 homes over the next three years with better access to finance. “We know that with a combination of private finance and State funding, three new homes can be provided for every home provided when State funding alone is used.”