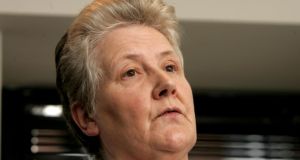 Marie Collins, a survivor of abuse, who was today appointed to a Vatican commission on protecting children from clerical abuse. Photograph: Matt Kavanagh/The Irish Times

The group has been formed to help the Catholic Church tackle the problem of clerical paedophilia that has dogged it for two decades.

The formation of a group of experts was first announced in December, and today the pope named the first eight members - four female and four male - from eight different countries.

These initial members will be responsible for rounding out the “commission for safeguarding minors” with other experts from around the world and defining the scope of the group’s action.

“Pope Francis has made clear that the Church must hold the protection of minors amongst Her highest priorities,” Vatican spokesman Rev Federico Lombardi said in a statement.

“Looking to the future without forgetting the past, the Commission will take a multi-pronged approach to promoting youth protection,” he said.

These will include taking criminal action against offenders, educating people about the exploitation of children, developing best practices to better screen priests, and defining the civil and clerical duties within the Church, Lombardi said.

Among those named to the group was Ms Collins, who was a victim of sexual abuse in Ireland in the 1960s and who has campaigned actively for the protection of children and for justice for victims of clerical paedophilia.

Another member of the commission is the archbishop of Boston, Cardinal Sean Patrick O’Malley, known as a pioneer for a more open approach to tackling scandal since he published a database of Boston clergy accused of sexual abuse of minors online in 2011.

He said the “commission will benefit greatly from her commitment to ensuring that the highest standards of child protection willexist in the Catholic Church around the world”.

Archbishop Martin described her as a “ person of great integrity and determination. I am grateful to her for accepting the appointment, knowing that over the years she had many reasons to have felt frustrated and disappointment by the failings and the slowness of the Catholic Church in Ireland in addressing child safeguarding concerns.”

1 A Russian cruiser with ‘cannibal rats’: What other ‘ghost ships’ could be out there?
2 DUP pleads with UK to reduce salary threshold for migrant workers coming to North
3 ‘If all the immigrants go back, who will work in the meat factories and do the crap jobs?’
4 Gardaí investigating four-lane motorway sulky race
5 Jewish council dismayed at Sinn Féin TD’s ‘unacceptable’ tweets
Real news has value SUBSCRIBE