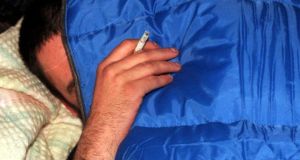 Proposals to build 200 houses on vacant Dublin City Council land by the end of 2016 to address homelessness in the city will be presented to councillors next month.

The council is proposing to build “modular housing” that would be prefabricated and erected rapidly on publicly owned land at an estimated cost of more than €20 million.

The units would be made off-site and then assembled on the council’s land, but they would not be “prefabs” in the common perception of the word, according to Dr Daithí Downey, deputy director of the Dublin Region Homeless Executive.

“This isn’t ‘cheap’ housing. These units would be of the highest standard, with an A energy rating, and would comply fully with the building standards in the Dublin City Development Plan. It’s just a construction method that would provide a large under of units quickly.”

The 200 units would cost about €100,000-€150,000 each, but would provide long-term housing for people in acute need. “This is a far better use of money than the more than €4.5 million that will be spent on keeping people in hotels this year,” he said.

Gerry Cahill, an architect who has worked on several city council projects, said it was unfortunate prefabrication had become synonymous with poor quality, temporary structures.

“All ‘prefab’ means is made off site, and in practice it means you can provide flexible, adaptable accommodation, which can be tailored to any specific needs, for long-term use. It doesn’t mean a race to the bottom.”

The council owns several large plots of “brownfield” land – sites which were formally used for industrial, commercial or housing purposes. It is in the process of determining which could be suitable for the modular housing, including establishing which already have services such as water, electricity or gas, or could have these services easily installed.

Erecting 200 houses in just two years was likely to require legislative change Dr Downey said. “There may be a need for change to the regulatory framework, in terms of site approval or procurement. The idea is not to suspend the planning system, but to allow it to move as quickly as possible for as speedy a provision of housing as possible.”

There may also bean opportunity for training for people so they could become involved in the construction of their own homes, he said.

“We would be looking for shorter supply lines, the use of local materials and local skills, which could allow people to become involved in constructing the own homes.”

If this model is successful in providing housing to address the immediate needs of homeless people it could be developed on a much larger scale he said.

“In this first phase there is an acute need to provide housing for homeless people, but we could get thousands of homes for rent on publicly owned land in the city using this model.”

For later phases of development an international competition would be held to secure a range of housing types which could be scaled up to deliver large numbers of rented housing on council lands, Dr Downey said.