Mother and baby inquiry to go beyond Tuam - Flanagan 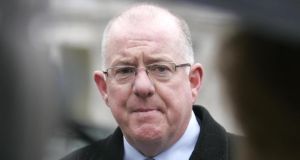 A Government inquiry into the mother and baby homes will not be confined to St Mary’s in Tuam, Minister for Children Charlie Flanagan has said. Photograph: Dara Mac Dónaill/The Irish Times

A Government inquiry into the mother and baby homes will not be confined to St Mary’s in Tuam, Minister for Children Charlie Flanagan has said.

It was expected that officials will advise the Government on the best form of inquiry “before the end of the month”, he said.

“The history of mother and baby homes in Ireland in the early and middle decades of the 20th century reflects a brutally unforgiving response by society, religious and State institutions and, in many cases, families, to young women and children when they were in most need and most vulnerable,” he said. “It is fully recognised by me and my Government colleagues that we need to establish the truth,” he said.

The Taoiseach said this evening he has asked Mr Flanagan to draw together a number of senior officials from across departments to deal with the issue.

Speaking on the matter at a jobs announcement at the head office of computer manufacturer Hewlett Packard in Palo Alto, California, on his three-day trade mission to Silicon Valley, he said:

“I have asked Minister Flanagan to draw together a number of senior officials from across the departments until we see what the scale of it is, what’s involved here and whether this is isolated, or whether there are others around the country that need to be looked at.

“It is to decide what is the best thing to do in the interests of dealing with yet another element of our country’s past.

“I understand that this has been known about since 1972 and clearly the Dáil records themselves show references to inspections under the system that operated at health level way back in the 1930s - so it is an issue that we need to deal with.

“Minister Flanagan will keep Government up to date very much with what is the best structure to put in place, to look at this and if there are others in locations elsewhere around the country.”

This afternoon the Catholic Archbishop of Dublin Diarmuid Martin called for “a full bodied inquiry” into mother and baby homes in Ireland and adoptions made from them. All who had responsibility for the homes should provide “full co-operation” with such an inquiry, he said.

In a statement this afternoon, he urged “those responsible for running any of the mother and baby homes in Ireland, or any other person having information about mass graves, to give that information to the authorities.” He described details of what has emerged from Tuam over recent days as “sickening”.

In separate statements this afternoon, religious congregations who ran the mother and baby homes in Ireland welcomed the Government’s actions. The Sisters of Bons Secours, who ran the Tuam home, said they welcomed “the recent Government announcement to initiate an investigation in an effort to establish the full truth of what happened.”

They were “shocked and deeply saddened” by the recent reports about St Mary’s Mother and Baby Home in Tuam.

This afternoon also, the Sisters of the Sacred Hearts of Jesus and Mary, who ran mother and baby homes at Bessborough in Cork and Castlepollard in Westmeath, said they would welcome “the setting up of an independent inquiry and would be happy to take part in such an inquiry to establish the truth about this very sad chapter in the history of Irish society.”

The Pro Life Campaign has called for “a full, open and transparent investigation into the babies’ burial ground discovered in Tuam, Co Galway”.

Its deputy chair Cora Sherlock said that “to honour the lives of the babies who are buried in Tuam, an investigation must ensue as soon as possible. The remit of any investigation should include those who died in the care of the State in similar homes where applicable.”

Meanwhile, the Bethany Home Survivors group has supported calls for such an inquiry. Representing people who had been in the Dublin-based Protestant-run mother and baby home as children, it said in a statement this afternoon “it is imperative that the Government takes action to face up to this shocking episode in the history of the State”.

It also renewed its demand “ for redress and compensation, for survivors of all so-called ‘mother and baby’ homes”.

This afternoon’s statement from Dublin’s Catholic archdiocese said that “several months ago, Archbishop Martin asked the Dublin Diocesan Archivist to compile information in the archive concerning mother and baby homes in Dublin. Hundreds of documents have already been collated.”

It said the Archbishop “will share this information with any inquiry the Government will establish”. He expressed the hope that a “full-bodied inquiry will be set up, examining all aspects of life in the homes and crucially how adoptions were organised.”

Over recent years Archbishop Martin had met representatives and some people who were born in mother and baby homes.

The story of the homes was not simply one from another time or era, but the personal story of hundreds of men and women alive today, living here and abroad, it went on.

Every effort should be made by all parties who were involved in setting up, running and overseeing these homes to ensure the mothers and children who were sent there, “have an accurate account as possible of their own life stories”, the statement continued.

The Archbishop has also urged the relevant religious orders and government bodies “to urgently consider a similar collation of documentation which could serve to quickly hasten the process of establishing and bringing into public light the whole truth of the mother and baby homes”.

To date, the statement said, “no information concerning mass graves has emerged from the Dublin Diocesan Archive”.

Archbishop Martin also supports “the setting up of monuments at any unmarked grave sites with, where possible, the names of those who died”, it said.