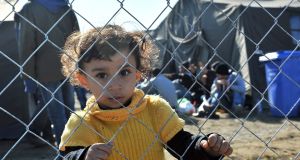 Smugglers transporting refugees and migrants across the Mediterranean are cutting their prices by half in a bid to boost traffic during the winter months, according to the UN Refugee Agency (UNHCR).

“We know the smugglers have been dropping the price as a much as 40-50 per cent as an incentive to get people across the water,” said Jody Clarke from the UNHCR, following the Irish Charities Tax Reform (ICTR) annual conference.

He said people were determined to make the journey to Europe as soon as possible because of fears European nations might close their borders.

Although this number marks a noticeable drop from last week when 9,000 people a day arrived on Greek shores, the UNHCR warns that people will continue to cross the Mediterranean through the winter months.

In addition to the dangers of crossing the Mediterranean in poorly built sea vessels, women and children making the perilous journey overland through Eastern Europe and the Balkans are at risk of abuse and sexual violence, according to the UNHCR.

“We have credible testimony from people who have either suffered sexual violence or abuse along the way,” Mr Clarke said.

“When people are in bus stations, on the roadside, in train stations, it makes them very vulnerable. A lot of people are without their parents, unaccompanied minors, and they’re in a particularly bad situation.”

Mr Clarke warned that some women and children were engaging in “survival sex” as a means of paying for transport through Europe. “With no money left, they have sex with smugglers and are sexually abused in order to keep moving. This underlines how desperate people are and underlines how children are particularly vulnerable.”

Although the EU has agreed to relocate 160,000 asylum-seekers from Italy and Greece to EU countries, the plan will only work if robust facilities are created to receive, assist, register and screen asylum-seekers and migrants, warns Mr Clarke.

He says only one of these “hot spots” has been established in Italy, while five have been identified in Greece but are not yet in use.

“This is one of the main reasons that we see people walking through the Balkans and stuck in bottlenecks at Slovenia, Croatia and elsewhere,” he said.

He said most refugees due to be relocated to Ireland will begin arriving in the new year, with only 20 people expected to arrive before Christmas.

‘As welcoming as possible’

“It is important that charities and community groups are involved early on in helping people to integrate,” said Mr Clarke. “Integration works both ways - people here have to make an effort as well. The onus is on the receiving society to be as welcoming as possible.”

“For refugees it is the despair that their only salvation lies in reaching Europe,” he said. “For the homeless it is a sense that there is almost no hope.”

1 How a ship abandoned by its owner brought deadly cargo to Beirut
2 Well-known figures in Irish domestic soccer arrested over €3m heroin haul
3 Show us the evidence that pubs spread Covid-19, says Government TD
4 Tributes paid as boy (15) who fell from Powerscourt Waterfall named
5 'There is no way I would go' - Irishman in Malta cancels trip home as two weddings put off
Real news has value SUBSCRIBE