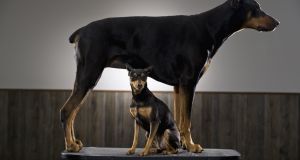 Two Doberman Pinschers - Boone and Flair Polo. Their owner says both were born from the same litter, but, as yet, only Flair Polo has been microchipped.

Two investigations have been launched after reports faulty microchips are causing dogs in Ireland to reduce in size.

From today, all dogs are required by law to be both microchipped and registered on an authorised database.

However, many owners have reported that their dogs appear to have shrunk in the weeks and months after the new microchips have been fitted.

The Department of Agriculture, Food and the Marine has confirmed they are aware of the reports, and have initiated an investigation.

Minister Simon Coveney did not comment on the controversy, but said the new rules “will act as a deterrent for those who abandon dogs, and assist in identifying marauding dogs and those that pose a threat to livestock or people”.

He said many owners have already had their dogs microchipped, particularly since the laws were signed last year.

The microchip is a tiny glass bead which is implanted under a dog’s skin between the shoulder blades.

It contains a radio transmitter, antenna and a computer chip with a code. The information contained is read using a scanner. 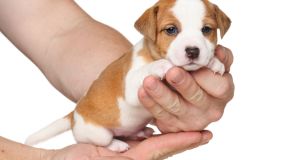 Gallery: Gone to the dogs

The Irish Veterinary Council confirmed they are also investigating the issue.

“We believe the problem may arise when the microchip migrates from under the shoulder blade,” said Prof Dolly Asia from the council.

“We’re advising dog owners to check if the microchip has moved. Owners should be able to feel a slight bump where the microchip is under the skin.

“If they can’t feel it, they should bring their pet to their local vet before it’s too late.

“Once the dog starts to shrink, there appears to be no way to reverse the process. However, we can halt it by taking out the chip.”

She said that “implanting any foreign material into a pet’s body is a risk.

“About 10 per cent of animals have some sort of reaction to being microchipped, though usually it’s merely a inflammation after the injection. Needless to say, this is the first time we’ve seen shrinkage.”

Frank “Steel” Doyle, from Kilkenny City, said he went to his local vet as soon as he noticed his dog, Toodles Galore, had started to reduce in size.

“Now, she fits in my jacket pocket.”

However, not everyone is unhappy with the apparent side effect.

“My dog was a little big for the house anyway,” said Rebecca McDonald, from Airplay Floods, Cranmore, Co Sligo.

“It’s roughly halved in size over the past six months, so it suits me fine. My only problem is that the cat has taken to chasing it around the house. I might have to microchip it too.”

1 Harry and Meghan will no longer be working members of British royal family
2 Mary Lou has to call for the smelling salts as SF councillor deals a knock-out blow
3 Peter Casey on the campaign trail: ‘My ideal job would be minister for health’
4 Victim stabbed 28 times has told court he lied to a jury last year
5 Dublin gangland figures involved in Drogheda feud that killed 17-year-old
Real news has value SUBSCRIBE