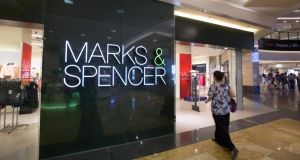 The Equality Tribunal, in a judgment just published, said Marks & Spencer (Ireland) had taken a “callous approach” with former sales adviser Bernie Clavin, who had been with the company seven years, and had treated her with “profound discourtesy”. File photograph: Andrey Rudakov/Bloomberg

Marks & Spencer (Ireland) has been ordered to pay €40,000 compensation to a former employee for discriminating against her after she developed a disability.

The Equality Tribunal, in a judgment just published, said Marks & Spencer had taken a “callous approach” with the former sales adviser, who had been with the company seven years, and had treated her with “profound discourtesy”.

Bernie Clavin started working in the Dundrum branch of Marks & Spencer in Dublin in March 2005.

In March 2011, she sustained an injury outside of work and was diagnosed with severe tendonitis - a condition where the tendons become inflamed causing extreme pain.

She submitted medical certificates and kept her employer informed of her situation.

She was referred to the company occupational health adviser and received a call from her, a nurse based in the UK, in June 2011.

Ms Clavin told her she had been referred to a specialist because of complications and the OHA said she would seek a report from the specialist.

The specialist’s report, which arrived on August 27th, 2011, said Ms Clavin was attending another specialist in the Mater Private hospital with a view to surgery.

There was no comment on when she would able to return to work. Ms Clavin was not being paid while she was off work.

In the letter she misquoted Ms Clavin’s specialist, saying he told her: “In view of this I am unable to advise on a likely date of return to work in the foreseeable future.” He had not written this.

Ms B wrote: “As there is no likely date for your return to work, can you please attend a meeting to discuss your current situation.”

Ms Clavin did not get this letter immediately as she was at her sister’s recuperating after surgery. She called Ms B as soon as she got home and explained, the tribunal heard.

She was phoned by Ms B on January 2nd, 2012 and asked to attend a meeting two days later, a Wednesday. Ms Clavin called her surgeon, but he had not returned to work after the Christmas break.

Notes kept by Marks & Spencer of the meeting record Ms Clavin explaining she had to “learn to walk again”, was on high doses of pain medication and would have to return to her surgeon.

The notes say Ms B tells her she will keep the job open if she can return to work in four to six weeks. She asks Ms Clavin to “come back to me by Friday” with her decision.

Ms Clavin phoned Ms B after the meeting to ask for more time so she could see her consultant, who would not be back at work before Friday. This call was not returned.

She received a letter on January 10th, 2012, telling her she had been dismissed on ill-health grounds.

She did not get her payment in lieu of holidays and notice period, until July 2012.

Equality officer Orlaith Mannion, in her judgment, said severe tendonitis requiring surgery is a disability, albeit a temporary one, within the meaning of the legislation.

There had been no real explorations of how Ms Clavin could be accommodated in returning to work. Ms Clavin had not been offered an opportunity to appeal the dismissal.

Her request for an extension of time to consult her consultant had been ignored.

Two days’ notice for a dismissal meeting was “inadequate”, and it appeared Ms B did not approach the possibility of retaining Ms Clavin with an open mind.

“The failure to pay the complainant her statutory entitlements (notice pay and annual leave) is indicative of the callous approach the respondent took to the complainant,” says Ms Mannion.

She ruled Marks & Spencer had “discriminatorily dismissed” Ms Clavin “on the ground of disability” and had “failed to provide appropriate measures that would allow the complainant to continue to be employed” and awarded €40,000 to Ms Clavin for breaches of the Employment Equality Acts.