Don’t scorn him for having chosen his life of heroin and homelessness.

In a scene from the RTE documentary 'The High Hopes Choir' filmed earlier this year by Tyrone Productions. David Brophy talks to Jonathan Corrie. 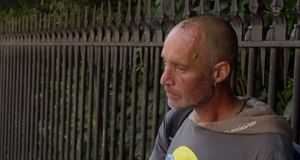 On Monday a homeless heroin addict died in Dublin city centre. He was Jonathan Corrie, and he was one of my best friends when I was a boy.

He was everything I wanted to be: daring and dextrous, fast and funny. He invented complicated and fabulously impractical mousetraps from lollipop sticks and ice-cream cartons.

He climbed to the top of a lightning-blasted tree that none of the rest of us could ascend more than halfway. He collected fistfuls of gold medals at every school sports day.

He won a children’s art competition with a crayon drawing of great detail and sophistication: a glorious day of fishing on the Nore, like the many he spent with his father, the banks lined with lucky anglers. Rare for a child’s art, the view is from a bird’s eye, taking in the whole scene at once.

Jonathan lived just up the road from us in Kilkenny, and, with my older brother, we spent school days and weekends together. This was the late 1970s and early 1980s, before safety was invented. Childhood was liberty. The only rule for Saturday afternoons was that we had to be home by 5.30pm.

We climbed the fence into Bobby Kerr’s field behind our house, poking with sticks at the flies swarming on the fresh cowpats. The field sloped down to the marsh and the uncharted muddy paths around it, where you could collect frogspawn.

Sometimes our enemies from Meadow Way chased us, and we’d lose ourselves among the undergrowth and maybe circle back to the safety of Jonathan’s home. His mum, big-hearted and generous, and a wonderfully talented cook, always made the perfect snacks to feed hungry boys.

Then came secondary school, and something changed. Jonathan was a face to greet in the corridors, and an ally by the lockers, but all the things that had made him fascinating – the smoking, the risk-taking, the impulsiveness – felt less like sunshine on a dull day, more like dark clouds over the future. I felt the wistful acceptance that many children know: the path forked, and, without ever thinking about it, you went one way and an old friend went the other way, and for now you can wave to them, but they are getting farther from you every day, and soon will be hidden behind brambles and undergrowth.

Listening to his interview on Dublin City FM, I heard a fragile, vulnerable man. He called himself Johnny and had killed the middle-class Church of Ireland accent of his childhood, to blend into his surroundings. He had little bitterness, just a quiet resignation and a hunger for human connection. I think he’d learned long ago that the world had no place where he felt he could fit in.

There are no simple lessons or easy political points to make from his life or death. He was brought up with love and discipline; his family never gave up trying to help him. He had no malice, no cruelty and no ability to connect action and consequence.

Don’t scorn him for having chosen his life of heroin and homelessness. There were choices along the way, but I think his brain was made so that he couldn’t say no, any more than he could say no to climbing the highest tree.

His crayon artwork took a bird’s-eye view of the river, but he never managed that in life: there was just a series of moments and impulses as he plunged along with the flow, and for a while I joined him, and the journey was exciting, but I was able to swim back to shore before the day turned cold and the current became treacherous and brought him out to sea.

He was a boy who could make anything, climb anything, and run like the wind.

Somewhere, he still is.

Luke Murphy, a writer, designer and film-maker, lives in Toronto