Actor and author Pauline McLynn takes part in a protest outside the Department of Agriculture against the export of Irish greyhounds to overseas destinations with weak animal welfare laws. 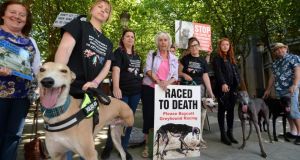 TD Maureen O’Sullivan with Pauline Mc Lynn and supporters during a protest outside the Department of Agriculture against greyhound exploitation. Photograph: Cyril Byrne

The State must ban the exportation of greyhounds overseas to end the slaughter and brutal treatment of dogs in countries such as China and Romania, animal welfare groups have said.

Thousands of Irish greyhound dogs which can no longer run in races or have been overbred are being shipped overseas each year where they face torturous treatment, Kerry Elliman from the Birmingham Greyhound protection group claimed on Tuesday.

Ms Elliman was speaking as the groups held a protest outside the Department of Agriculture calling for an end to exports of the dogs to certain countries. She accused the Irish, UK and Australian governments of turning a blind eye to the mass exportation of these dogs.

“China now has its own breeding facilities. Every meat truck in China has greyhounds in it. I’ve seen videos of them being cooked on woks while they’re still alive in inches of water... being boiled alive and skinned alive,” she claimed.

Independent TD Maureen O’Sullivan called on the State to reverse its “appalling record on animal welfare” and ensure that Irish greyhounds who have finished their domestic racing careers are no longer shipped overseas where they face “horrible treatment and a painful death”.

The Irish Council Against Bloodsports (ICABS) and the UK group Caged (Campaign against greyhound exploitation and death) have begun a nationwide ad campaign on buses to highlight the cruelty towards greyhounds both in Ireland and abroad.

Nicole Matthews from ICABS called for an end to the “barbaric” greyhound industry. She said countless dogs were being sold to slaughterhouses in Asia for human consumption after being overbred, injured or discarded for not being able to run fast enough.

In a statement, the Department of Agriculture said it maintained a close working relationship with animal welfare charities and had met with those dealing with greyhound exports.

“Information received to date from the department’s local offices indicates that no greyhounds were exported directly from Ireland to China to date this year,” it said, adding that nine were exported last year.

It said while it had data on exports to EU countries it could not track movements to subsequent destinations. “Once animal health and welfare standards, set by EU law for trade within the EU, are met, dogs, including greyhounds, may be exported,” it said.

Asked last month about the export of greyhounds to China , Minister of State for Agriculture Andrew Doyle said the Irish Greyhound Board advised all owners of greyhounds to only export to destinations that provide the expected levels of greyhound care and management as defined in its code of practice.

The Minister added that department officials were examining the Bill on the merits of creating a white list of countries that treat greyhounds and dogs generally well.

1 Micheál Martin raises need for ‘end point’ of coronavirus restrictions
2 This time, the future of the euro really is at stake
3 Coronavirus: More ‘striking’ evidence BCG vaccine might protect against Covid-19
4 Coronavirus: 25 more people die in the Republic; New Garda powers come into force
5 Coronavirus Q&A: What new powers have the gardaí been given?
Real news has value SUBSCRIBE