Ireland the most ‘youthful’ EU country, with 40% of population under the age of 30 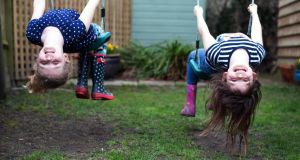 Ireland’s fertility rate, at 2.01 live births per woman (in 2012), was the highest in the EU (along with France), but it is still below the population replacement level of 2.1 per cent.

Ireland has the highest proportion of children in the European Union, according to a new report.

Last year, the proportion of children in Ireland (counted as young people under the age of 15) was 22 per cent. France was next highest, at 18.6 per cent, with the UK on 17.6 per cent and Denmark just behind at 17.2 per cent.

The figures are contained inthe Eurostat report: What it means to be young in the European Union today.

The report finds that Ireland is also the most “youthful” country in the EU, with four out of 10 people (40.1 per cent) aged under 30. At the other end of the scale, the share of under-30s was lowest in Italy and Germany. 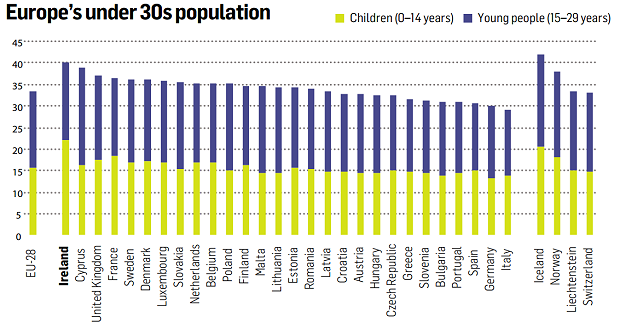 “Investing in children and youth is the key to making the future prosperous, both economically and socially,” said report editor Mariana Kotzeva.

Numerous studies have concluded that the EU’s population is likely to shrink in the coming decades, she said. This was due to a prolonged period of relatively low fertility rates. This means that there are a decreasing number of children and young people in the total population.

This demographic shift in the number of young people in Europe is taking place against the backdrop of a growing elderly population. Although this ageing phenomenon has been recorded across the all the world’s industrialised societies, it has impacted the EU population more than others, the report states.

Ireland is singled out for providing a more youthful population than other EU states. The growing gap between old and young populations in the wider EU could result in labour market shortages and an increased burden supporting the remainder of the population, according to the report.

Ireland’s fertility rate, at 2.01 live births per woman (in 2012), was the highest in the EU (along with France), but it is still below the population replacement level of 2.1 per cent.

While Ireland is keeping the birth rate ticking over, in the EU, the number of children as a proportion of the population has fallen over the past 20 years.