Ireland agrees to accept 600 refugees over the next two years

Migrants, mainly from Syria and Eritrea, will arrive from Italian and Greek ‘hot spots’ 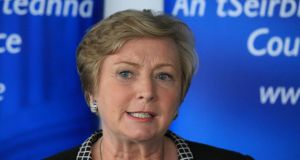 Minister for Justice Frances Fitzgerald: “We have reached a point where Italy and Greece, who are really on the front line, are under unsustainable pressure.” Photograph: Collins

Ireland has agreed to accept 600 refugees, mainly from Syria and Eritrea, over the next two years, Minister for Justice Frances Fitzgerald has said.

She was speaking after a meeting of EU justice ministers in Brussels, which considered a plan to relocate up to 40,000 refugees in need of international protection who are currently in Italy and Greece.

The plan to relocate refugees to Ireland, which is subject to approval by the Oireachtas, is in addition to a previous commitment to resettle 520 refugees from areas affected by conflict.

The measures finalised at the Brussels meeting include an agreement to establish a number of “hot spots” in Italy and Greece where migrants will be registered in line with EU law.

Individuals identified as likely to be genuine refugees can be put forward for relocation to another member state, while irregular migrants are to be returned to their countries of origin.

“The scale of the challenge facing the EU in relation to migration is enormous, and we have reached a point where Italy and Greece, who are really on the front line, are under unsustainable pressure. They can’t be left to shoulder that burden alone just because of their geographical situation,” said Ms Fitzgerald.

“It is important that Ireland join together with our partners to assist in the relocation effort and show solidarity, just as we have on refugee resettlement and in the exemplary work of the Naval Service in search and rescue in the Mediterranean.”

As part of the relocation process, a full security check will be carried out by the relevant EU member state. There will also be a chance to take individuals’ suitability into account before a decision is made on relocation.

The people relocated will have their applications for refugee status examined in Ireland. The mechanism is confined to people coming from countries that have a higher than 75 per cent recognition rate for asylum claims in the EU. They are likely to be either Syrians or Eritreans in the first instance. Funding of €6,000 per case will come from the EU. Ms Fitzgerald stressed that relocation was not a long-term solution but would alleviate pressure while other EU measures were put in place.