President pays tribute to ‘bravery and tenacity’ of Stephanie Meehan 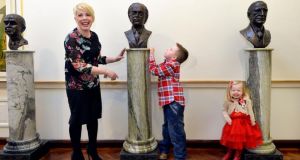 President Michael D Higgins paid a special tribute to Stephanie Meehan during a reception for Priory Hall residents at Áras an Uachtaráin yesterday.

Ms Meehan’s partner of 17 years, Fiachra Daly, died by suicide last July when he felt pressured to pay arrears on their uninhabitable Priory Hall apartment. Their two children Oisín (8) and Cerys (2) accompanied her at yesterday’s reception and presented the President and his wife Sabina with a Christmas card and a gift each.

In an address, Mr Higgins remarked how the residents’ experiences over the past two years had often been “at great personal cost”. It was why he wanted “to particularly mention Stephanie Meehan, whose bravery and tenacity at a time of enormous personal tragedy moved and impressed a nation.

“Stephanie’s dignity and generosity of spirit has been publicly acknowledged by the Priory Hall residents, and I would like to add my voice to theirs in thanking her for being an inspiration to us all and a true embodiment of courage in the face of tragedy.”

Advocacy role
He also commended “Graham Usher and his colleagues for the very effective way they carried out their advocacy role on behalf of all the residents. Their calm, measured and dignified voices conveyed . . . that the cause of justice lay with the residents and that there was a burden of responsibility which lay with society.”

He acknowledged “the personal role” of the Taoiseach in delivering a settlement in the situation and of his secretary general, Martin Fraser, who attended the reception.

The President included Dr Martin McAleese, who “will continue to make an important contribution to resolving this issue”.

It was almost four years since the first tenants were evacuated from Priory Hall, he said, but the end of 2013 marked “a turning point in a difficult struggle” for them, “ a struggle for justice and fairness for a place that you could call home”.

He commented that “in failing to control speculation, by light or no regulation, our citizens were failed by those in whom trust was placed in their duty of care towards all of our citizens.

Ethics of a republic
“The ethical values necessary to be at the heart of any flourishing society, not to speak of a republic, were seen, by some, as a redundant relic of the past.”

It was “something that must not be allowed to re-emerge, that must be rejected”.

In a brief response, Mr Usher thanked the President and his wife for hosting the reception.