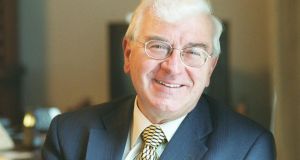 A former director of public prosecutions has intervened in the abortion debate, arguing that the Bill tabled by Government last week is unconstitutional given that “the foetus gets no chance to have its right to survival advocated”.

In an article in today’s Irish Times, Eamonn Barnes, who retired in 1999 after 25 years as DPP, says it is “hard to see” how the proposed suicide clause is consistent with article 40 of the constitution, which refers to the “equal right to life” of the mother and the unborn.

He suggests that, when doctors are considering a termination on suicide grounds, the attorney general should represent the interests of the unborn at all stages of proceedings and be empowered to initiate judicial review of a decision.

In line with the X-case ruling of the Supreme Court in 1992, the Protection of Life During Pregnancy Bill provides for a medical abortion where there is a real and substantial risk of loss of the woman’s life by way of suicide.

In cases of suicidal intent, a panel of three specialist doctors must jointly certify that the risk to the mother’s life can be averted only by carrying out the termination.

Pointing out that the Bill allows the mother to apply for a review of the decision if she is refused a termination, Mr Barnes writes: “She gets two chances to have the life of the foetus terminated . . . As matters stand at present, the foetus gets no chance to have its right to survival advocated at all or otherwise vindicated.”

“Surely,” he writes, article 40 “calls for an equality of opportunity to have both rights to life adequately asserted”.

The Bill says the three specialists assessing cases involving suicidal intent must include an obstetrician and two psychiatrists. Mr Barnes expresses concern about these procedures, saying he finds it “difficult to accept” that a group of three doctors would be the best way of assessing the “bona fides” of a woman’s claim to be suicidal.

While psychiatric expertise would no doubt be of assistance in “ascertaining the reality of claim that a woman is suicidal because of her pregnancy”, he writes, it could “scarcely be asserted that such expertise is peculiarly or exclusively appropriate” in arriving at a decision.

“Obviously this would be particularly true of a case where a woman would make a spurious or dishonest claim of suicidal ideation for the purpose of obtaining a termination of her pregnancy under the provisions of the Bill if enacted in its present form,” he adds.

Proposing changes, Mr Barnes suggests the attorney general should be the person to ensure that the constitutional right to life of the unborn should be vindicated at all stages. The attorney should also initiate any application for judicial review which “might appear appropriate”.

As DPP in 1992, Mr Barnes had a role in the drama that culminated in the landmark X-case judgment. Early that year, a family told gardaí their 14-year-old daughter had been raped by a neighbour and was pregnant. They said they intended to bring her to the UK for an abortion.

Mr Barnes referred the matter to the then attorney general, Harry Whelehan. He sought an injunction to prevent the girl leaving the jurisdiction, believing the 1983 amendment required the State to do so to protect the unborn child’s life. The High Court granted the injunction but the case ultimately ended up in the Supreme Court.