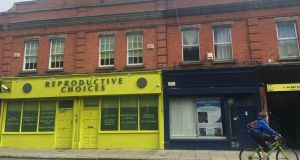 The Women’s Clinic (in building on right) on Berkeley Street in Dublin is next door to Reproductive Choices, a pregnancy advisory clinic closely aligned to the Marie Stopes organisation in the UK. The clinics are unrelated. Photograph: Ronan McGreevy/The Irish Times

Minister for Health Simon Harris has promised to consider “every possible option” to ensure women are provided with reliable pregnancy counselling information.

The Minister said he found the revelation “very alarming and very worrying” and had asked for an urgent update on the issue. “I’ll consider every possible policy option to make sure women are presented with factual, accurate information about their own health.”

The HSE said that while it was aware of alleged “disingenuous” crisis pregnancy services, it does not have the power to regulate the sector, or to prosecute.

It said it has addressed the problem by ensuring women are aware of State-funded crisis pregnancy counselling services through the Positive Options advertising campaign.

HSE-funded counsellors have also been asked to report any disingenuous services, a spokeswoman said.

“There has been no change in relation to the regulation of crisis pregnancy counselling services, though there has been significant improvements in the training and supervision in all State-funded services.”

An investigation by the Ireland edition of The Times found a Dublin clinic was telling women experiencing crisis pregnancy that abortion could increase their risk of breast cancer. An undercover reporter was told an abortion would disrupt her chances of having other children and cause her psychological damage.

The counsellor, who claimed to have had 18 years’ experience, compared an abortion to a bereavement and said it would have consequences for a mother’s relationship with her other children.

The Women’s Clinic on Berkeley Street in Dublin is next door to Reproductive Choices, a pregnancy advisory clinic closely aligned to the Marie Stopes organisation in the UK. The clinics are unrelated.

There is no sign above the door or phone number for the Women’s Clinic.

HSE-supported agencies were funded, said Ms Zappone, “on the basis of them providing impartial advice. If it’s the case that impartial advice is not being provided, that could simply add to the trauma of what the women are experiencing and I could not support that.”

When The Irish Times called to the Women’s Clinic premises there was no answer, but a hospital trolley and hospital curtains could be seen through the window.

The only indication of its purpose is a sign in the window highlighting the death of a 15-year-old girl in Britain five days after she had an abortion at a Marie Stopes Clinic in July 2007.

Peter Boylan, head of the Institute of Obstetricians and Gynaecologists, said there was a need for regulation of such clinics, but he added that all regulation in the field was complicated by the Eighth Amendment to the Constitution.

He accused the Women’s Clinic of effectively offering “mumbo-jumbo” to women in a vulnerable position.

He stressed there was no evidence backing up the assertion that women who have an abortion are more likely to experience breast cancer.

The Pro-Life Campaign said a discussion on the counselling services available to women with an unexpected pregnancy was long overdue.

“It goes without saying that women facing an unexpected pregnancy should at all times be given accurate and precise information,” the group’s spokeswoman Cora Sherlock said.

She said it was “telling” that members of Government such as Ms Zappone were prepared to comment at a point when questions were being raised about “a counselling agency opposed to abortion”.

Choice Ireland, which campaigns for legal abortion in Ireland, said it had highlighted the issue of unregulated clinics as far back as 2009.

Spokeswoman Stephanie Lord said the Government had a duty to ensure that all crisis pregnancy counselling services were regulated.

“The clear aim of these organisations is to bully and manipulate vulnerable women into not seeking terminations,” she said.