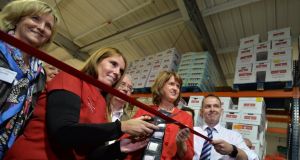 A new central food bank, to meet “growing demand for food assistance”, has opened in Dublin.

The Dublin Food Bank, operated by Crosscare, the social support agency of the Catholic Archdiocese of Dublin, expects to provide 750 tonnes of donated food to charities and communities by the end of the year.

Tánaiste and Minister for Social Protection Joan Burton, who opened the new facility yesterday, said she was “very pleased” to support its work.

The facility, based in Dublin Industrial Estate in Glasnevin, has moved from a one- room facility on Portland Row to the larger warehouse-size unit.

It will dispense donated food to 70 charities and community food banks around Dublin. Among the companies that donate food are Aldi, Lidl, Tesco, Kellogg’s, Robert Roberts and Cuisine de France.

Everything, he stressed, complied with all food and safety regulations and was top quality.

On shelves at the bank yesterday were boxes of cereal and tea, tins of fruit and baked beans, bags of rice and pasta, as well as luxury goods such as chocolates, nuts and cakes.

“It is very difficult to say how many people our services feed every day,” Mr McDonagh said. “This year we will move 750 tonnes of food and each tonne can produce 400 meals.”

The food bank will act as a central depot at which community food banks, as well as charities, can access supplies.

“This is run on a membership basis and charities pay a membership fee, just to keep the rent paid and the service running. They can come and see what we have, place an order and the food is free to take,” Mr McDonagh added.

The facility is not open to members of the public. However, they can get food at Crosscare’s own community food banks, at Jobstown, Blanchardstown, Swords, Dún Laoghaire and Dundrum.

Ms Burton, who opened the facility, said she was “very familiar . . . with the work of all the organisations which have for decades in Ireland helped people who have issues around poverty and with being out of home.

“I want to commend the work of organisations here in Dublin and in Cork and in Galway and in Waterford and in other parts of the country.

“I think this is a great form of community effort,” Ms Burton added, “which actually means the business community can provide first quality stock which can then be used to supply dinners, supply goods to people who need them.

“That’s why I am here, because it’s something I have been involved in really since I was in school. I am very pleased to be here today.”

A group of anti-water charges protesters carrying banners heckled the Tánaiste as she arrived.