Childcare providers ‘are taking out loans just to pay staff’ 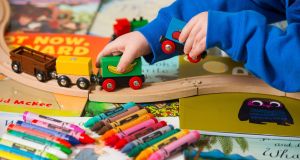 Some childcare providers in the State are taking out bridging loans to pay their staff because their financial situations are so precarious, an Oireachtas committee has heard. File photograph: Dominic Lipinski/PA Wire

Some childcare providers in the State are taking out bridging loans to pay their staff because their financial situations are so precarious, an Oireachtas committee has heard.

Early Childhood Ireland told the Oireachtas Committee on Children and Youth Affairs that many such services operated “riskily” in financial terms and did not make enough of a margin to reinvest in their services.

The organisation’s chief executive, Teresa Heeney, said it was hearing “constantly” about providers having to enter into agreements with Revenue to pay their tax.

Some had no money to pay staff and were going to credit unions to take out bridging loans to help them do so, she said.

She said any “blip” in the system, such as delayed payments, had a huge impact.

Ms Heeney said that these were “life issues” for people who were providing services under a contract to the Government.

Childcare provider Paula Hilliard told the committee she was running her business while also paying to do a Master’s degree.

She said quality for staff, as well as for children, had to be considered.

“You can’t separate them.”

Ms Hilliard also said: “I don’t think any provider wants to, but I can see it’s a possibility that they might have to increase their rates.”

Early Childhood Ireland said it strongly agreed with the approach to the issues in the budget, including the plan to introduce a new Single Affordable Childcare Scheme from September 2017.

However, it said it was critical to get this scheme right from the start.

The scheme includes a new childcare subsidy of 50 cent per hour for children under the age of three (equivalent to €20 a week for full-time care), as well as new supports, on a graduated basis, for families on low incomes.

“We also agree with the approach where the State pays the provider or registered childminder directly to subsidise the real cost of childcare, in keeping with international research showing that it leads to better outcomes in increasing the availability and quality of childcare provision,” the organisation told the committee.

“The initial €19 million investment [for the scheme] in 2017 needs to be increased consistently year-on-year. We envisage that the universal scheme should achieve a minimum subsidy of €1.50 (equivalent to €60 per week for full-time care) by 2021.”