No law or referendum can alter true nature and meaning of marriage, says Denis Nulty 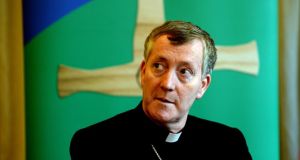 Bishop of Kildare and Leighlin Denis Nulty said: “Irish people might be forgiven for thinking that we are the last place on the planet to legalise same-sex marriage, which is not true; 18 out of 193 nations have done so.” File photograph: Cyril Byrne/The Irish Times

Bishop of Kildare and Leighlin Denis Nulty has warned against the “danger of groupthink” on the upcoming same sex marriage referendum.

“Irish people might be forgiven for thinking that we are the last place on the planet to legalise same-sex marriage, which is not true; 18 out of 193 nations have done so,” he said.

A poll by Red C last month showed strong support for same-sex marriage, with 80 per cent in favour and 20 per cent against once undecided voters are excluded.

Bishop Nulty, who is president of Catholic marriage care service Accord, was speaking at the launch of a survey regarding attitudes to marriage and family.

Bishop Nulty said he was speaking on the issue in a personal capacity. “Accord is not an advocacy group, it’s an agent of the Church, so therefore we don’t get involved in the debate,” he said.

“I’m simply saying, ‘Let’s step back a little and look and reflect’. There’s limited research on what needs to be done, but equally [we need to] support homosexual people, and the Church is there to do that in their relationship,” he said.

“The sacrament of marriage reflects the union between Christ and the Church. One woman, one man united in Christ in faithful love. No law or referendum can alter the true nature and meaning of marriage,” he said.

“Marriage has always recognised sexual differences. This is because society recognises the importance of the setting in which new human life, new members of society come into existence.

“It is of vital importance to society that the definition of marriage is protected, sustained and supported.”

The bishop noted Amárach research which found that 65 per cent of Irish adults agree that a child is more likely to grow up happy if raised in a home with “a loving mother and father”.

Commenting on Independent TD Clare Daly’s Bill calling for abortion to be allowed in cases of fatal foetal abnormalities, he said: “My first thoughts are with the family. This is a most difficult situation for families to find themselves in. The Church is very strongly pro-life as an organisation and institution.

“The important thing is that we support the eighth amendment which is based on equality - and equality is a word we hear lot of in media circles.

“The equal right to life of the unborn and the mother, and looking after both. That doesn’t in any way take away from the struggle that families go through and I’m very much aware of that.”