Despite negative views, concern over impact on schools and hospitals has eased slightly

Changing demographics: A majority feel our immigration policies should be made more restrictive (53 per cent), but these numbers have also fallen. Photograph: Frank Miller/The Irish Times

Attitudes towards immigration have hardened since the economic crash, a new survey indicates.

The findings are based on a poll of 1,000 people carried out earlier this month and in 2008 by Amárach Research into attitudes towards integration.

There are also sharp contrasts in perceived differences across different immigrant, religious and ethnic groups, with Travellers and Muslims regarded as the least integrated into Irish society.

The findings will be presented at a national integration conference in Dublin today, a Metro Éireann initiative supported by The Irish Times. Overall, the numbers who feel – on balance – immigration has been good for Ireland have fallen, down from 54 per cent in 2008 to 41 per cent this year.

Similarly, the volume of respondents who feel immigration has been a bad thing has risen, up from 33 per cent to 37 per cent over the same period.

Concern over the negative impact of immigration on public services, such as schools and hospitals, also remains high. But it has eased significantly compared to seven years ago. 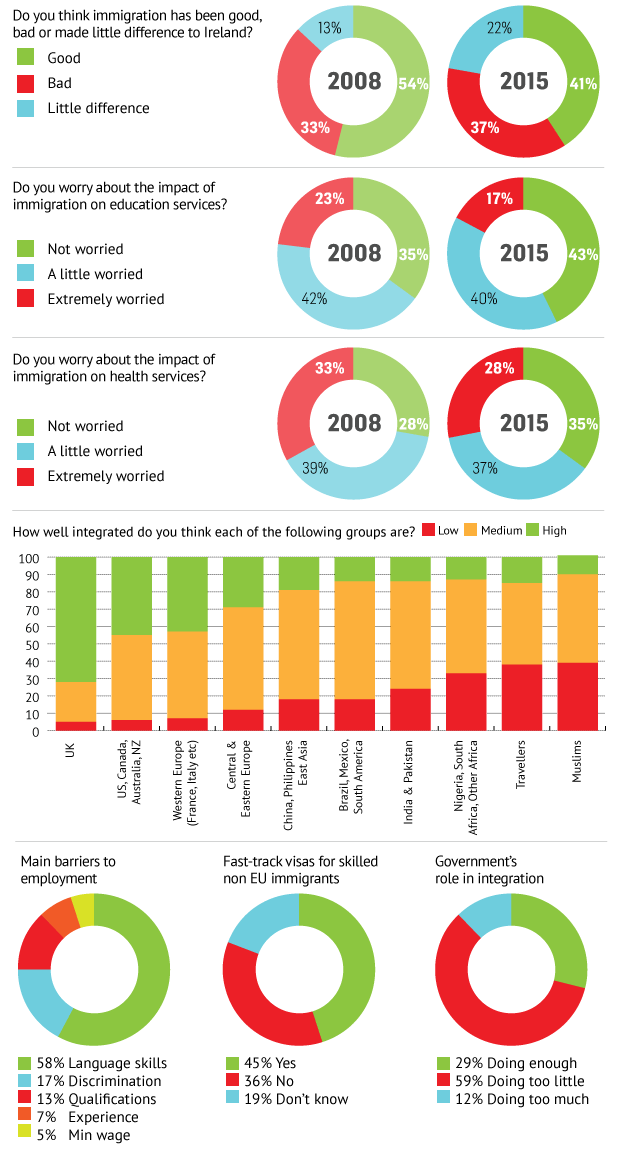 Towards the tail-end of the boom, migration into Ireland was running at more than 100,000 annually. Since the crash, emigration has risen sharply while immigration levels have halved, resulting in net outward migration for each of the past five years.

On the question of integration, there has been relatively little change in perceptions of the extent to which immigrants form part of Irish society.

In terms of the Government’s role in integration, there has been remarkably little change with exactly 59 per cent in agreement in both surveys that it is doing too little.

When asked to identify the main barriers towards integration, most cited language skills (58 per cent). Other factors included racial discrimination (17 per cent), qualifications (13 per cent) and lack of experience (7 per cent).

A majority (57 per cent) felt giving greater access to third-level education to immigrants would enable them to contribute positively to Ireland.

There is a recognition among many schools will be vital in helping integrate immigrants. A large proportion (42 per cent) feel schools should equally accommodate children from culturally diverse backgrounds. But there was less confidence in how schools have performed to date. Less than a third (31 per cent) agree the education system has adapted well to the increase in diversity.

6:17 Fintan O’Toole: The DUP created this mess but now it belongs to all of us

Thinking Anew – ‘Peace be with you’