Opinion: Wider issues of ‘adoption’ and treatment of children in homes must be looked at 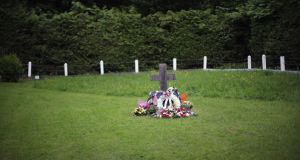 The infants’ graveyard at the mother and baby home at Sean Ross Abbey in Roscrea, Tipperary. Photograph: Niall Carson/PA

It is difficult now to imagine how it must have felt to be a young woman in Ireland in the 19th or 20th century and to find yourself pregnant and unmarried. Your news would not be greeted with joy, by anyone.

You would feel the anger and disappointment of your family. If you were desperate, you might try and hide your pregnancy and attempt to give birth without assistance and then dispose of the infant’s body.

In the early 20th century, a local priest might be informed of your situation and would recommend placement in a mother and baby home. You might enter the workhouse to have your baby. If your family had money they might pay for a place in a private home where your shame could be hidden. Or you could go to England and have your baby there.

Imagine the anxiety of having to tell your parents you were pregnant, the accusations, the arguments, the tears, the shame, the fear the neighbours might find out, the loss of face that would follow, the gossip and the scandal.

Even in 1980s Ireland, there were friends of mine who, pregnant out of wedlock, married rather than bring “shame” to their families. The idealisation of motherhood was a significant feature of the rhetoric of politicians and the churches in the Irish Free State. All western societies from the 1920s saw women’s duty to the state best carried out through marriage and motherhood. However, motherhood was accepted only within the context of marriage.

In Ireland, unmarried mothers brought shame to the nation and to their families, and they were problematic to the notion of an Ireland that was pure and sexually innocent. The apparent rise in illegitimacy rates during the 1920s was attributed to a loss of parental control and responsibility during the period of the War of Independence and the Civil War. That control, it was argued at the time, had never been restored. Moral laxity was seen as the result of the prevalence of “commercialised dancehalls, picture houses . . . and the opportunities afforded by the misuse of motor cars for luring girls”.

The workhouse was the chief refuge for many women who found themselves pregnant outside marriage. Workhouses were officially abolished in 1925 and became county homes, but many unmarried mothers still used them, and were more likely to take their babies home with them.

In the private sphere, for those families who sought and could afford anonymity, there were lodging houses where women could reside until their confinement.

From the 1920s, the Sisters of the Sacred Heart of Jesus and Mary opened their unmarried mother and baby homes in Bessborough, Sean Ross Abbey, and Castlepollard. The Bon Secours ran the home in Tuam, Co Galway.

There were dozens of organisations and institutions that dealt with unmarried mothers, some supported by local government and others run privately. Once in religious-run homes, women were subjected to strict discipline and limitations on their movement. While generally expected to stay up to two years, arguments were often made for their continued detention. The nuns at Bessborough noted in 1932 that since many of the girls were “very weak-willed” they had to be maintained in the home for a longer period to safeguard them against a “second lapse”.

The great fear always was that an unmarried mother, if not carefully watched, would “relapse” and eventually fall into prostitution. “Reoffenders” came to be seen as mentally deficient and it was argued that such women were better “cared” for in Magdalen Asylums.

The Tuam scandal raises complicated issues about our history. Catherine Corless’s steadfast research brings to light the deaths of 796 infants and children in the Bon Secours Home in Tuam from the 1920s to 1961.

There is nothing yet to link these deaths with the remains found in the discovered grave near the home. A public inquiry is essential to establish the facts of this particular case and to uncover what happened to infants in all the homes and organisations that dealt with them. At the very least, any inquiry must consider what the mortality rates were in these institutions and explore the medical attention available to infants.

Can all of the children born in these homes be accounted for? How many children were fostered or “adopted” (adoption was not legal in Ireland until 1952)? What oversight was there of these institutions, many of which received funding from the local authorities? How did charitable organisations dispose of the infants in their care? What we must not forget in any inquiry is that these organisations and mother and baby homes operated in a context where illegitimate children and unmarried mothers were considered shameful.