Ireland to lead EU consortium on future of supercomputing 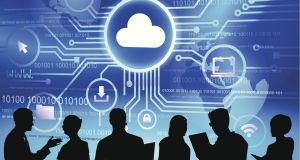 The EU announced on Thursday, October 15th, that it would invest €140 million from its Horizon 2020 science programme to develop the next generation of supercomputing technologies. File photograph: Getty Images

Ireland has been chosen to lead an EU consortium looking at the future of supercomputing across Europe.

The consortium will form a centre of excellence to help bring this advanced technology into wider use.

Supercomputers are the most powerful computers available. They are regularly used to make weather predictions and to model the effects of climate change.

They are used in astronomy to model the Big Bang and planet formation, and in medicine to study proteins and their functions.

The EU announced on Thursday, October 15th, that it would invest €140 million from its Horizon 2020 science programme to develop the next generation of supercomputing technologies.

Of this, €4.8 million will go to the creation of a new centre of excellence for supercomputing, known as E-Cam.

Ireland will lead it on behalf of the wider Cecam network of European computational science institutes, said Prof Padraig Dunne, head of the school of physics at University college Dublin.

The consortium, involving 16 other institutional and 12 industrial partners from around Europe, will be chaired by Prof Luke Drury of the Dublin Institute for Advanced Studies.

UCD hosts Ireland’s Cecam node and has been selected to co-ordinate the consortium, Prof Dunne said.

NUI Galway will be a major partner as host to the Irish Centre for High-End Computing or Ichec, our national supercomputer facility.

The goal in the coming years is to develop 150 specialised “software modules” that can provide supercomputing capabilities for a range of areas.

This includes research studies into food for health, for drug development and analysis, and for the study of biological systems.

Ichec will test the modules as they are produced and they can then be used by industrial and academic researchers, Prof Dunne said.

The goal was to increase the use of advanced computer modelling, the institute said.

The first general assembly of E-Cam members takes place on Tuesday, October 20th, at the RIA in Dawson Street, and the Minister of State for Skills, Research and Innovation will formally open the meeting with an address.

‘I don’t want to be in Mountjoy Prison, nobody does’ 01:25
Mountjoy prisoners gain access to third-level education during pandemic 01:24
Science books to peruse this pandemic winter 01:00
The real Contagion virus is out there and it’s causing virologists to worry 01:00
More support needed for Midlands move away from peat, says commissioner 21:30