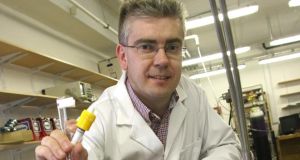 Engineer Dr Henry Curran was one of three NUI Galway academics included on the list.

Eleven researchers based in Irish universities have been ranked among the world’s top 3,000 by the multinational media body Thompson Reuters. Inclusion means the person’s research is listed in the top 1 per cent for the number of times their work has been cited by other scientists.

All were gauged to be “highly cited researchers” who had had an “exceptional impact”, Thompson Reuters said.

Their work “has consistently been judged by peers to be of particular significance and utility”, the company said when releasing the list on the website highlycited.com.

Those selected will also be published in book form, the Thompson Reuters 2014 World’s Most Influential Scientific Minds.

The use of citation listings as a measure of research quality has sometimes been drawn into question but it remains a widely used metric despite this.

Its strength lies in the fact that it reflects later access of the research by scientists working in the same area.

If your paper is truly cutting edge then others will want to cite the original work within their research papers.

“Being included in the top 1 per cent of anything is great,” he said. He described it as a “huge testament” to the work of his research team over the past decade.

Prof Coleman also praised the students and post doctoral researchers who work with him in the lab, and thanked funding bodies including TCD and Science Foundation Ireland.

“Without them this would have been impossible,” he said.