It seems we are all susceptible to illogical thinking, including scientists and philosophers 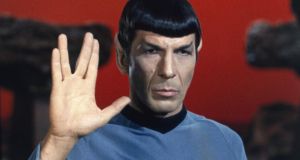 ‘This is highly illogical’: Leonard Nimoy as Spock

We expect scientists and philosophers to think clearly and rationally. We turn in particular to philosophers to help us to sharpen our critical thinking skills so that we can avoid bias and logical errors. However, recent studies, summarizsed by Dan Jones in the British Psychological Society Research Digest (2015), show that philosophers are as susceptible to poor-quality thinking as the rest of us and also that scientists frequently indulge in non-scientific thinking.

Take as an example the blameworthiness assigned to moral scenarios. It is known that the moral judgments of ordinary people are affected by the order in which they encounter moral-dilemma scenarios. For example, in one such scenario a drunk driver loses control of the car and crashes into a tree; in an alternative scenario the drunk driver loses control and kills a pedestrian.

Non-philosophers who read about the tree scenario before the killed-pedestrian scenario are more likely to rate the two cases as equivalent in moral blameworthiness than when they read about the two scenarios in the opposite order.

One would expect that philosophers would judge each case on rational and philosophical grounds, independently of the order in which they encounter them. However, a study conducted by Eric Schwitzgebel and Fiery Cushman (Mind and Language, 2012) showed that professional philosophers are swayed by the order in which they encounter moral scenarios too, although the effect went in the opposite direction to the sway exhibited by the non-philosophers.

The authors of this study very recently repeated the research in a more comprehensive manner, comparing philosophers with non-philosophers of otherwise equal educational attainment (Cognition, 2015). This time some of the philosophers had specific specialised training in ethics. The scenarios used in this latest study were drawn from mainstream ethical philosophy. In one dilemma (Switch case), you imagine yourself standing on a bridge overlooking a rail track and you see a runaway rail carriage hurtling down the track towards five people who cannot escape and who will die if the rail carriage hits them. There is a switch on the footbridge that would allow you to divert the rail car on to another track where only one person stands.

In the alternative scenario (Push case), there is no divert switch on the bridge but you are accompanied on the footbridge by a very large man. If you push him off the bridge on to the track he will stop the runaway rail car, saving five lives but dying himself.

The participants were presented with the two cases (Switch and Push) in random order and asked to rate them on a moral scale, from extremely morally good to extremely morally bad. The participants in the study were more likely, philosophers included, to rate Switch and Push as morally equivalent when they encountered Push before Switch rather than Switch before Push.

Teleological thinking, the belief that certain phenomena are better explained by purpose than by cause, is not scientific. An example of teleological thinking in biology would be: “Plants emit oxygen so that animals can breathe.” However, a recent study (Deborah Kelemen and others, Journal Experimental Psychology, 2013) showed that there is a strong, but suppressed, tendency towards teleological thinking among scientists, which surfaces under pressure.

Eighty scientists plus control groups were presented with 100 one-sentence statements and asked to answer true or false. Some of the statements were teleological, as in the example quoted above. Half had to answer within three seconds, while others had as long as they liked to answer.

The study of a philosophers’ thinking is dispiriting, for philosophers anyway, although it may be hard for us ordinary non-philosopher mortals to suppress a chuckle at these results. One would also have to feel pessimistic about the prospects for success of ordinary peoples’ efforts to overcome mental biases.