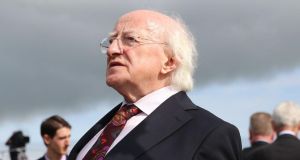 At the Festival Interceltique, President Michael D Higgins was warmly received as the only head of state of a Celtic country. But what does Ireland have in common with the seven Celtic regions: Brittany, Asturias, Cornwall, Galicia, the Isle of Man, Wales and Scotland?

“In my view, the centrality of the thing is the sea; the sea as the space which was travelled,” Mr Higgins said. “The Celts of Europe travelled much longer and farther than previously thought. They brought back pieces of culture and lodged them on the periphery.”

Ireland is regarded as the leader of Celts to the extent that its language is constitutionally recognised and protected, Mr Higgins said.

“The language is important . . . but what the sea has carried more than anything else is music. The Irish language was already under grave pressure in the 19th century, most of it imposed. In the great exodus of the Famine, the music survived better.” Irish traditional music “went across the Atlantic and came back”.

Mr Higgins declined to comment on the appointment of a Minister for the Gaeltacht who is not fluent in Irish, saying it was “a matter for the Taoiseach”. In every speech he made in Lorient, he used some Irish. He makes a point of using Irish every day at the Áras.

Mr Higgins said he visited “many, many schools” to encourage the teaching of Irish. As minister of the Gaeltacht, he established the Irish language television station TG4.

“I cannot comment on who is an appropriate Minister,” he said. “What I regularly do is encourage the public service to use more Irish.”

French people are setting up Irish traditional music groups and GAA clubs in significant numbers. Attendance at this year’s festival has increased 30 per cent – because it is the “year of Ireland,” organisers say.

If Ireland were not a small, neutral country, one might almost speak of cultural imperialism. “I would describe it as an energy of diversity,” Mr Higgins said. Though Irish culture is popular around the world, he preferred not to use the word “globalised”.

“In the case of Irish complexity, you are opting into it rather than involuntarily being forced to accept it,” he explained.

On July 31st, Mr Higgins was heckled and even called a “traitor” by demonstrators who objected to the presence of Prince Edward, Duke of Kent, at the dedication of the Cross of Sacrifice commemorating first World War dead at Glasnevin Cemetery.

“I have no difficulty with people expressing opinions, nor is it correct to say I was irritated by those whose view is different to my own,” he said.

There was, however “no point in people shouting insults”. He will be greeted at war commemorations in Belgium today by the Duke and Duchess of Cambridge. An Irish Times reader complained last week of “continuous sycophantic kowtowing to British royalty in relation to a dynastic war between inbred aristocratic cousins”.

“The Duke of Kent was there as president of the graveyards commission,” Mr Higgins said regarding the Glasnevin ceremony. “Why insult not only the living but the dead?”

The vast majority of letters received by the Áras regarding his visit to England earlier this year were positive. “The relationship between Her Majesty Queen Elizabeth and myself is a relation of equals,” the President insisted.