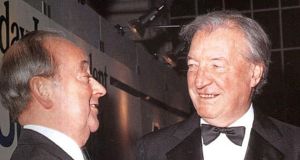 Des Traynor (left), an accountant and financial adviser to late former taoiseach Charles Haughey (right), was a director and de facto chief executive of Guinness & Mahon Bank from 1969 to 1986.

These were funds lodged here by the Cayman Islands bank, Ansbacher Cayman Ltd. They were at the core of an unauthorised financial service run in secret by the late Des Traynor.

Wealthy clients opened offshore trusts and lodged money through him. They also made withdrawals and took out loans, which were secretly backed by their offshore deposits, through Mr Traynor.

Mr Traynor, an accountant and former taoiseach Charles Haughey’s financial adviser, was a director and de facto chief executive of Guinness & Mahon Bank from 1969 to 1986. His system allowed account-holders to lodge money with the bank in College Green, which was then held offshore. The money would be accessed through Mr Traynor in Dublin.

Ansbacher was first disclosed during the McCracken tribunal in 1997, which investigated payments by Ben Dunne/Dunne Stores to Mr Haughey and the former minister for communications Michael Lowry. The Ansbacher accounts ran from 1971 and the Irish operation was finally wound up in the mid-1990s.

In 2002, a report identified 200 holders of Ansbacher accounts, including Mr Haughey and eight members of the CRH board. Revenue investigations into the accounts have yielded over €112 million in unpaid taxes and penalties.