Water protesters scuffle with security staff and Gardai after breaking through a security cordon at the Labour party annual conference at the NEC in Killarney. Video: Bryan O'Brien 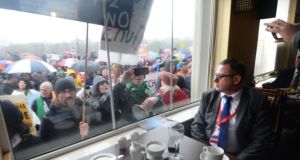 Cameras are brandished by both sides as water charge protesters gather outside the Labour Party conference in Killarney. Photograph: Cyril Byrne

The campaign against water charges has become the first popular protest in Ireland to make widespread use of social media – especially video channels – to publicise its protests and activities.

Some 22,700 recordings have been uploaded on to YouTube of anti-water charge marches, protests, demonstrations and marches.

In addition, more than 110 separate groups have set up pages on social media sites, such as Facebook, where videos of protests are uploaded, events publicised and information on the location of Irish Water meter installers shared. Most are in Dublin, but there are groups in every constituency.

On Saturday, more than 500 protesters marched from the town centre in Killarney to the entrance to the INEC, where the Labour Party conference was being held.

It was a largely peaceful protest, though a small group of about 10 broke off from the main march and headed towards the INEC entrance, leading to minor scuffles at the barriers with gardaí and security staff.

Mobile phones were held aloft throughout the protest and, with a high-quality camera on almost every phone there are few such events, even minor ones, that are not recorded and uploaded on to a video or social media channel.

At least five protesters recorded and uploaded video on the protest against President Michael D Higgins in Finglas in January, during which a protester, Derek Byrne, described the president as a “midget parasite”.

This contrasts with the level of coverage and publicity for the anti-bin charge protests a decade ago. While those protests attracted large support in working class areas in the city, their national profile was much lower than that of the current protests, notwithstanding the jailing of two of the campaign leaders, Joe Higgins and Clare Daly. There were 246 news and opinion articles on the protests in 2003 and 2004.

The videos vary in subject matter and tone. The vast majority are general recordings of larger protests.

But a minority are recordings made by anti-protests campaigners of scuffles with gardaí and employees of or contractors for Irish Water, a hallmark of videos posted by groups in Edenmore and Cabra in Dublin.

The footage has included a small number where direct and confrontational tactics were used by protesters. Though small in number these have attracted a disproportionately high viewership.

There are montages showing dozens of faces of Irish Water contracted water meter installers under headings such as “Irish Water thugs exposed”.

Confronting gardaí by challenging them about which laws they are invoking, or accusing them of being agents for Irish Water, is another feature. In one video, several protesters aggressively berate a female garda, with one telling her she would get “battered” if a male garda was not standing beside her.

Unmonitored comment sections have contributions that amount to incitement to hatred. This is particularly evident on the video in which Tánaiste Joan Burton was hit by a water balloon during the protest in Jobstown.

In Killarney at the weekend, one placard held by a protestor had a picture of a shotgun barrel open and read: “Hi Joan, the people of Killarney welcome you with open arms. You better go fast before they open them.”

Larger anti-charge campaigns, such as Right2Water, as well as national politicians involved with the water- protest campaign, have all condemned the use of any personal insult or intimidation, while defending the right of people to protest.

However, some smaller protests tread a narrow line between peaceful protest and mob rule. In some videos, demonstrators have worn hoods – their supporters say it’s so they are not identified by gardaí or Irish Water.

The first widespread use of video footage as a news source was after the tsunami in southeast Asia in 2004 and after the London bombings of 2005. During the revolutions that swept the Arab world over the past five years, such use became commonplace. Videos were used during the Occupy Wall Street protests and similar anti-globalisation protests elsewhere, but more subjectively as those shooting the footage were activists.

“I’ve watched tens of thousands of videos from protests and revolutions around the world over the last five years,” says Gavin Sheridan, a journalist with an expertise in processing data. He previously worked with Storyful, a news agency that identifies amateur video footage that has news value.

“More people have smartphones now, so the quality of many videos is quite high. In terms of interactions between protesters and An Garda Síochána vis a vis smartphones, it would be directly comparable to US protests since Occupy Wall Street (albeit those were often better organised and cohesive).”

Liz Crocker, a research specialist in emerging media at Boston University’s department of anthropology, has said the ability to videotape everything from a first-person perspective “takes it beyond just the documentary to the momentary sensation that you are there in that space and place”.

In an email response after viewing some water protest videos, she said: “It feels like the cop is yelling at you and not just the photographer. And that is more likely to get you riled up and angry about police action than passively observing. Watching the video becomes active participation in a way.”

Ms Crocker said most people would be uncomfortable being videotaped in public without warning, especially if they suspected the videos would go online and identify who they are. “It isn’t surprising that police in Ireland and America are cautious and uncomfortable being filmed.”