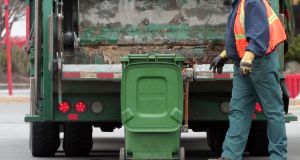 Concerns have been raised about the cost for older families and how a system which was supposed to save money for 80% cent of families has left the majority paying more. Photograph: Getty Images

The Government is to warn waste management companies it will issue regulations on them if refuse charges continue to increase.

Minister for Housing Simon Coveney is to meet the firms on Friday evening and advise them he will intervene to ensure the pay-by-weight scheme is not abused.

Mr Coveney said it would be a complicated process but he is willing to introduce strict new regulations if necessary.

The Minister said the increases, which will come into force on July 1st, are unacceptable and will not proceed.

When asked if he will suspend the scheme until the companies lower their costs, Mr Coveney replied that it was too early to decide. He said he was eager to hear from the companies but accepted a decision would have to be made early next week.

It is understood Mr Coveney is also considering a hardship scheme or a waiver for bigger families.

The new system will see bin charges be goverened by a pay-by-weight system from July 1st, but some companies have been increasing standing charges – by as much as 200 per cent.

Former minister for the environment Alan Kelly, who initated the process, said he had made in clear to the waste companies that the terms and conditions of the statutory instrument would be revisited and revised if abused.

He said firms had taken advantage of the political vacuum that arose after the election, “where there was no functioning environment section in any relevant government department”.

“I’m not suggesting that there is commercial collusion taking place here – that of course would be a criminal offence – but it has become clear in recent weeks that competition in the waste market is not functioning properly and that a greater level of intervention from the state is required,” he said.

It is understood the TDs raised concerns about the cost for older families and how a system which was supposed to save money for 80 per cent cent of families has left the majority paying more.

Mr Heydon and Mr Rock asked Mr Coveney to report back to the parliamentary party next week.

Fianna Fáil spokesman on housing Barry Cowen said the charges should be suspended until clarity is provided. He said there has been a complete failure of communication by the Department of Environment regarding the structure of these new charges.

“Serious consideration should be given to the viability of a transition period to the new system to ensure households are fully informed and can financially plan around their expected charges,” he said. “There is little point implementing a system that is destined to fail from day one.”

Sinn Féin has tabled a motion in the Seanad to revoke the statutory instrument which applies the charge. It will be debated next week.

The Anti-Austerity Alliance-People Before Profit group will also use their private members motion time in the Dáil next week to table a similiar motion.

“We warned 15 years ago that bin charges and privatisation would inevitably lead to this kind of profiteering because once you put a price on something profit overtakes any concern for fairness or the environment.”