Prohibition must be agreed between Ministers for Health and Sport 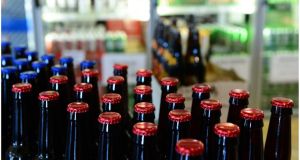 A ban on alcohol sponsorship in sport has faced vigorous opposition from sporting organisations and drinks companies. Photograph: The Irish Times

A clause allowing for the banning of alcohol sponsorship of sports is to be included next month in new legislation designed to limit the sale and misuse of drink.

However, the implementation of such a ban – which has faced vigorous opposition from sporting organisations and drinks companies – will be subject to the full agreement of the Minister for Health and Minister for Sport.

Both Leo Varadkar and Paschal Donohoe have said alternative funding for sporting organisations must be in place before any ban is introduced.

Mr Varadkar is expected to publish the heads of the Public Health (Alcohol Bill) in January, and it is expected to include an “enabling clause” for such a ban, although it would have to be ratified by the two Ministers.

Although measures to tackle alcohol abuse have circulated around Government for some time, and have been championed by different ministers in the Department of Health, the Coalition postponed making a decision on the sports ban.

The issue was handed to a review group, under the Department of the Taoiseach, to consider.

The group has yet to issue its final report.

However, it considered the implications of a sports sponsorship ban as well as raising possible alternative revenues if a ban were introduced.

Speaking to The Irish Times, Mr Varadkar said he still holds to that view in his present post as Minister for Health.

However, he said he wants the new legislation to allow for a ban, but only with the agreement of Mr Donohoe.

“Essentially, what I’d like to have in the legislation is a provision enabling restrictions on the advertising and sponsorship related to sport, but that would only happen with the agreement of the Minister for Transport, Tourism and Sport being satisfied that alternative funding was in place.

“It is still my view that if we are going to take drinks companies sponsorship away from sporting organisations, we are going to need, first of all to have a time gap, or lead-in time for that, but secondly we need to identify where the alternative source of finance would come from because sport contributes to health and contributes to the economy,” said the Dublin West TD.

A spokeswoman for Mr Donohoe said he was unwilling to change the existing rules unless another funding stream was identified, which seems unlikely at present.

The four main aspects of the Bill will be:

l The structural separation of alcohol from other goods in shops and supermarkets;

l Some advertising and sponsorship restrictions.

The minimum unit pricing is not intended to have an impact on higher end or specialist alcohol products but instead is focused on cheaper drink often used by “hazardous or harmful” drinkers, according to a Department of Health paper.

Other measures include the limiting of alcohol sponsorship on radio and television to evening hours only, as well as to over-18 films in the cinema; restrictions on outdoor advertising from 2018; and setting limits on how alcohol is portrayed in adverts.