Conference hears of moves to disengage with Labour Party 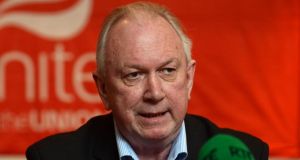 The Unite trade union is to lodge claims for pay rises in different parts of the economy where it has strong representation.

Speaking at the union’s Irish policy conference in Belfast today, regional secretary Jimmy Kelly said the downward drift in wages over recent years had been bad for society, the economy and workers.

“Where we have strength within the different sectors of the economy we are going to be backing up that (the pay claim) with what we see as the appropriate action to defend workers first of all, to defend workers’ rights and improve and increase wages. That has to be the agenda. We have had too many years of the opposite happening, wages being cut, wages being frozen. That has to stop.”

Mr Kelly also said the union was disengaging from the Labour Party. He said the recent move by the Government to introduce cuts on workers’ wages in the public service was the final tipping point.

He said Unite currently donated up to €30,000 to the Labour Party each year but the first meeting of its new executive would reconsider this. He said the conference had sought this freeze in donation to be a temporary measure to see if the Labour Party “would do the decent thing” in relation to union recognition, pension protections and workers’ rights.

”If they do not it will be a permanent disaffiliation,” he said.

Mr Kelly told delegates in his address to the conference that there was a real sense among working people that the trade union movement was not doing enough to protect their interests and their living standards, “never mind working to create a different world”.

He said the Government in Dublin had on three occasions in recent years attacked the wages and conditions of its employees but the trade union movement had been unable to protect its members.

He said the concept of collective bargaining in the public service had now been torn up.

Mr Kelly said in the wider economy the strategy of the Fine Gael-led Government was to restore profits and drive profits at the expense of the living standards of workers, public services and public investment. He said that was the goal of austerity.

He said there was only one way to deal with austerity and that was to defeat it.

“We are paraded around the world as an example of a people who have resigned themselves to austerity. And yet when the trade union movement has called on people to express their opposition to Government policies, the turnout has been massive - from the public sector strike in the North to days of action in the Republic,” he said.

“This does not suggest a resigned people. It shows that people will participate, will demonstrate when they are confident in the leadership. The trade union movement, which represents over 800,000 workers on this island, is in the best position to lead that opposition and lead that alternative.”